Days of Our Lives Spoilers: Eric Devastated By Nicole’s Marriage to Tony – Turns To Sarah For Comfort 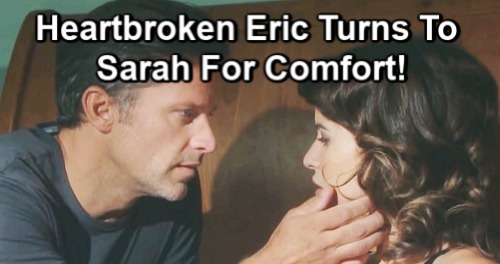 Days of Our Lives (DOOL) spoilers tease that Eric Brady (Greg Vaughn) will soon have a new sorrow to brood over. He’s been down in the dumps ever since Nicole Walker (Arianne Zucker) turned on him shortly after the death of her daughter, Holly Jonas (Harlow and Scarlett Mallory).

Of course, DOOL viewers are aware that this version of Nicole is actually Kristen DiMera (Stacy Haiduk) in disguise, and that she had to make “Nicole’ dump Eric so she could pursue Brady Black (Eric Martsolf) and carry out her plan to infiltrate DiMera Enterprises.

Eric simply can’t believe that his true love Nicole has treated him so terribly. She’s just not the Nicole that Eric knew, and he’s been completely wrecked by her recent behavior. “Nicole” even went so far as to claim that Eric deliberately manhandled her and caused a big gouge on her arm…something that Brady ended up believing!

Kristen DiMera Plans To Remain In Disguise As Nicole Walker

But if Eric thought that “Nicole’s” behavior was strange before, he’s really going to be in for a surprise when it comes to light that she’s getting married! According to Days of Our Lives spoilers, Kristen will decide that she needs to take drastic measures to regain some measure of control over the DiMera empire. As Nicole, she’ll track down a presumed-dead Tony DiMera (Thaao Penghlis) and suggest that they marry.

From ongoing DOOL spoilers, it sounds like Kristen’s plan will be to remain in disguise as Nicole, marry Tony, and then use Nicole’s new DiMera status to try to become the CEO of DiMera, ripping the company away from Stefan DiMera (Brandon Barash). She’ll have some serious competition in that quest from Stefan and Gabi Hernandez (Camila Banus), but it looks like she could become the next CEO of DiMera.

Well, all of “Nicole’s” actions will certainly cause some confusion among the people who know and love her. Brady will certainly be puzzled by the development, given that “Nicole” has been hitting on him nonstop for the past few weeks…and now she’ll be marrying another man!

Drama Also On The Menu For Sarah Horton And Rex Brady

And for Eric, the news of “Nicole’s” new marriage will be absolutely devastating. Eric was hoping that she’d eventually come around and soften toward him over time. Eric has been chalking up Nicole’s hostile attitude toward him up to her grief over Holly’s death, but when he hears that she’s up and married someone else…and that it’s Tony…he’s going to be seriously confused.

Of course, around the same time that all of this is happening, drama will be on the menu for another DOOL couple. Sarah Horton (Linsey Godfrey) and Rex Brady (Kyle Lowder) will soon undergo a major development in their marriage, with Sarah inadvertently expressing her true feelings for Eric and Rex ultimately leaving town.

And since Eric and Sarah will both be reeling from their respective relationship issues around the same time, look for them to support to each other. Of course, Sarah typically tends to be around to comfort Eric after his troubles with Nicole, so this won’t be a new situation by any means.

Do you expect to see Sarah and Eric get together after Nicole’s marriage comes to light and Rex exits Salem? Stay tuned to DOOL and don’t forget to check CDL often for the latest Days of Our Lives spoilers, updates, and news.