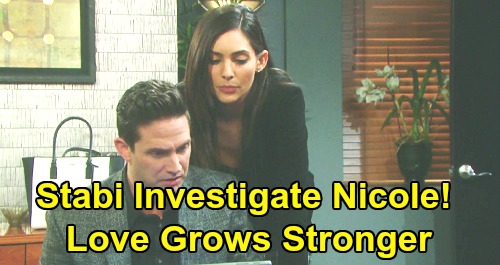 Days of Our Lives (DOOL) spoilers tease that Gabi Hernandez (Camila Banus) has a formidable task in front of her. She’s bound and determined to get Stefan DiMera (Brandon Barash) to fall head-over-heels in love with her and marry her so she can ultimately take him for everything he’s worth.

As DOOL viewers know, Gabi still harbors a grudge from when Stefan helped frame her for Andre DiMera’s (Thaao Penghlis) murder, and she wants revenge.

But things are getting a bit difficult for Gabi. Stefan has just admitted that he’s developing feelings for her, and she’s starting to reciprocate those feelings, despite her overall revenge plan. Gabi constantly reminds herself of her ultimate goal, but she’s feeling something for Stefan, too – something that goes far beyond physical attraction.

And in the coming days, Stefan and Gabi are going to team up in another way – to combat Nicole Walker (Arianne Zucker). Nicole, who is really Kristen DiMera (Stacy Haiduk) in a Nicole mask, is hell-bent on getting her claws back into the DiMera business and empire. And as “Nicole,” she’s causing havoc for both Stefan and Gabi.

As DOOL viewers know, Stefan was just arrested for kidnapping and holding Ted Laurent (Gilles Marini) and Kate DiMera (Lauren Koslow) in the tunnels beneath his house. Stefan is innocent but is being framed by Kristen, who is forcing Ted and Kate to falsely implicate Stefan.

Well, when Gabi got wind of Stefan’s arrest, she absolutely rushed to his aid. She and Stefan put two and two together and realized that “Nicole” must have something to do with Stefan’s framing. But since they don’t know that Nicole is actually Kristen, they’re missing a big piece of the puzzle.

Stabi Work Together To Find Out Why Stefan DiMera Was Framed

Stefan will probably be touched by Gabi’s willingness to help him out of his legal jam and solve the mystery of why “Nicole” would want to frame him and see him behind bars. And who knows, they might just be the ones to finally blow Kristen’s cover in Salem!

At any rate, look for Stefan and Gabi to get closer as the days go by and for Gabi to start falling in love. Are you liking “Stabi” as a couple so far? Stay tuned to DOOL and don’t forget to check CDL often for the latest Days of Our Lives spoilers, updates, and news.