Days of Our Lives Spoilers: Nicole and Eric’s Reunion Sabotaged – Vengeful Rex Fights Back After Eric and Sarah’s Betrayal? 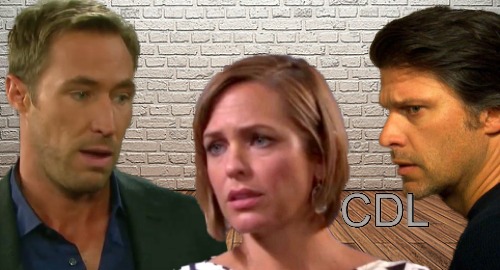 Days of Our Lives (DOOL) spoilers tease that some brother battles are brewing on the NBC soap. Brady Black (Eric Martsolf) will kick things off by giving Rex Brady (Kyle Lowder) a warning. He’ll let him know that Eric Brady (Greg Vaughan) has been known to steal his brothers’ love interests.

Of course, Brady should’ve known what he was getting into when he started building a life with Nicole Walker (Arianne Zucker). Eric and Nicole have always had a strong connection. Even Eric’s role in Daniel Jonas’ (Shawn Christian) death couldn’t break it – not permanently anyway. DOOL fans knew it was just matter of time until “Ericole” reunited, so Brady should’ve been more careful with his heart!

Likewise, Rex can’t see what’s right in front of him. He blew it with Sarah Horton (Linsey Godfrey) by cheating on her twice, which gave Eric the chance to bond with her. They can’t help their connection. Days spoilers say Sarah will plant a kiss on Eric during the week of March 11-15. She’ll be comforting him over Dr. Marlena Evans’ (Deidre Hall) attack, so it’ll just happen in the heat of the moment.

Unfortunately, Eric will spot the lip lock and blast Eric. He’ll think this pattern of woman-stealing has become a real problem. Still, this is a complicated situation. Sarah has been deeply betrayed by Rex, who’s already pressuring her to get engaged again. He seems to think balloons and a bouquet can fix anything, but Eric’s the one who actually sits down and has deep conversations with her.

Besides, Rex has no room to talk after knocking up Mimi Lockhart (Farah Fath) and sleeping with Sarah’s sister, Noelle Curtis. Her kiss with Eric will be nothing compared to Rex’s horrible behavior. Rex apparently can’t grasp how badly he hurt Sarah.

It’s not ideal for Eric to kiss back as he presumably will once Sarah initiates. However, Brady’s issue with Eric is personal. This is about the way he got burned when Nicole wanted to reunite with Eric. Brady’s actions were far worse since he caused Nicole to lose her soul mate and put her in the position to get blackmailed by Xander Cook (Paul Telfer).

Nicole wouldn’t have been presumed dead in that explosion if it weren’t for Brady, so he has no room to talk either! A simple kiss is honestly the least offensive mistake you could make in Salem. Nevertheless, Eric could end up paying the price for it.

Days of Our Lives spoilers say Nicole is headed back to Salem on April 25. Will Rex sabotage his brother’s long-awaited reunion? Brady has plenty of regrets about how things went down with Nicole, so he’s probably learned his lesson. He’d rather yell at Eric and throw punches than seek revenge.

Rex, on the other hand, might try to tank Eric’s romance. That’s especially true if Sarah doesn’t want to get back together with Rex. Days of Our Lives spoilers say she may be too busy pining for Eric! Even if Rex doesn’t do something incredibly sinister, he could still make life difficult in “Ericole’s” world.

Regardless, Nicole and Eric will face some bumps in the road as they fight for a future together. We’ll give you updates as other Days news comes in. Stay tuned to DOOL and don’t forget to check CDL often for the latest Days of Our Lives spoilers, updates and news.