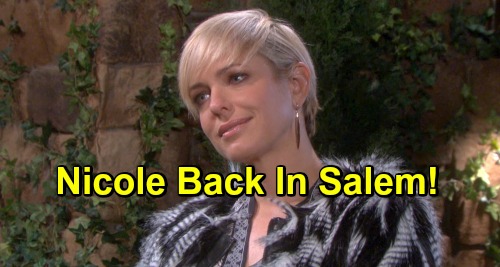 Days of Our Lives (DOOL) spoilers tease that Nicole Walker (Arianne Zuker) will soon be making a return to the NBC soap. It’s been four months since Nicole supposedly died in the Nashville warehouse explosion, and fans were ecstatic when TPTB revealed that Nicole would be returning this spring. Her first airdate will be on Thursday, April 25.

But what exactly will bring Nicole back? We’re betting that Xander Cook (Paul Telfer) will have something to do with her return. When we last saw Nicole, she was alone in the warehouse, which was burning all around her.

Since Xander managed to get other warehouse residents, such as Jack Deveraux (Matthew Ashford), out of the blaze before the explosion, it stands to reason that he may have rescued Nicole at the last minute.

Of course, when Nicole returns, she’ll probably expect to have a passionate reunion with Eric Brady (Greg Vaughan). Eric will surely be happy to see his love again, but a lot will have changed in Eric’s life over the past few months. Eric came to terms with Nicole’s death and started having feelings for someone else…Nicole’s friend Sarah Horton (Linsey Godfrey).

One might think that after finding out that Xander survived the explosion, Eric might have pushed Xander on whether Nicole survived, too.

But Eric hasn’t gone that route. Rather, he’s been too busy getting close to Sarah and brooding over her renewed romance with his brother Rex Brady (Kyle Lowder). Nicole’s pretty feisty, and she might take issue with the fact that Eric didn’t even consider the possibility that she survived.

Of course, there’s also the issue of where Nicole has been all of this time. Xander might have schemed to keep Nicole from Eric and her daughter Holly (Harlow and Scarlett Mallory), but there may be more to it than that. Nicole could have been seriously injured in the explosion, and she may have been fighting her way back to health all these months.

Time will tell exactly what Nicole’s been though and what’s kept her away, but we’re looking forward to seeing her back on screen. Are you? Stay tuned to DOOL and don’t forget to check CDL often for the latest Days of Our Lives spoilers, updates, and news.