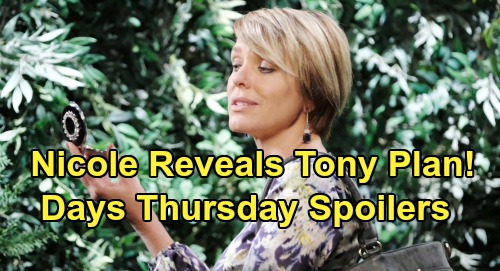 Days of Our Lives (DOOL) spoilers for Thursday, July 25, tease that Jack Deveraux (Matthew Ashford) will spread the word. If Wednesday’s episode didn’t air in your area, you can always check it out on NBC.com. It looks like Days will proceed as usual for the rest of the week, so let’s talk about all the action happening on Thursday.

After getting a dose of a phony serum on Wednesday, July 24, Jack will spend Thursday’s DOOL episode telling Jennifer Horton (Melissa Reeves) and JJ Deveraux (Casey Moss) the good news. Of course, this won’t change how JJ feels about Jack’s horrible behavior lately, but he should be pleased that his dad might come back to him. JJ would certainly like to see Jack be the better man he used to be.

Jennifer would like to see that as well, but she may stick to her plan of moving on. She may at least try not to get her hopes up about Jack remembering her and continuing their love story. He’ll assure Jennifer that he’s committed to his marriage, but Eve’s betrayal will be a game-changer for Jack soon enough.

In the meantime, “Nicole Walker” (Arianne Zucker) will be on a mission to get everything she wants. Brady Black (Eric Martsolf) may be putting up a fight, but Kristen DiMera (Stacy Haiduk) can focus on that later. She’ll determine that going after DiMera Enterprises is the more pressing matter since she set up Stefan DiMera (Brandon Barash). “Nicole” has to strike while the iron’s hot!

Other Days spoilers state that Stefan and Gabi Hernandez (Camila Banus) will do some strategizing. They’ll realize “Nicole” is undoubtedly plotting a takeover, so Gabi will want to get ahead of her threat. She’ll suggest their own marriage as their best chance at thwarting “Nicole.” Gabi will definitely be thinking about her own plot here, but part of her should also like the idea of being Mrs. Stefan DiMera.

Days of Our Lives spoilers say Stefan will get on board by the time Friday rolls around. Gabi and Stefan will scramble to prepare for their nuptials in the week ahead, so it sounds like some fun scenes are coming up. We’ll give you updates as other details emerge. Stay tuned to DOOL and don’t forget to check CDL often for the latest Days of Our Lives spoilers, updates and news.