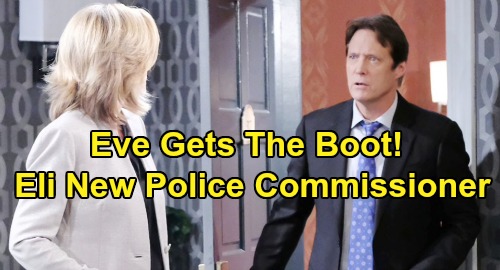 Days of Our Lives (DOOL) spoilers tease that mayor Jack Deveraux (Matthew Ashford) will soon be making a new hire. Some big changes will be coming in Jack’s life very soon, as he and wife Eve Deveraux (Kassie DePaiva) are headed for splitsville. According to DOOL spoilers, Eve will seriously betray her husband by thwarting his efforts to regain his memories, and Jack will demand a divorce.

When Jack and Eve do split, it seems that things will also change with Eve’s employment status. As DOOL viewers know, Jack appointed Eve as Salem’s police commissioner shortly after he was elected mayor. Eve has ruled with a heavy and corrupt hand, and she’s thwarted justice on more than one occasion, completely frustrating detectives Eli Grant (Lamon Archey) and Lani Price (Sal Stowers).

Most recently, Eve essentially let Xander Kiriakis (Paul Telfer) go scot-free, even though both Kate DiMera (Lauren Koslow) and Ted Laurent (Gilles Marini) implicated him in their kidnapping and told the police directly that he kidnapped them on the orders of Stefan DiMera (Brandon Barash). Of course, that was a lie, but any police commissioner worth his or her salt would have been all over Xander.

But since Eve is in cahoots with Xander, as they’ve done quite a bit of illegal activity together, she let Xander go. It’s possible that Eve will get caught in some illegal activities and Jack will have every reason to fire her…or perhaps Jack will fire her due to her actions in thwarting his memory retrieval attempt, which will likely involve Eve’s stealing of the memory serum that Jack has produced for himself.

At any rate, whether Jack will actually fire Eve or whether she’ll end up leaving the position voluntarily remains to be seen, but DOOL spoilers indicate that Jack will be making a big hire soon and that Eli will be his choice to become police commissioner. That’s great news for Eli and great news for Salem, since Eli is an upstanding cop…much unlike Eve, who’s neither upstanding nor a cop.

According to Days of Our Lives spoilers, Eli and Lani will spend some time celebrating Eli’s big promotion, and Lani will be thrilled for her new fiancé. Do you think that Eli will be an effective police commissioner, and will you enjoy seeing him in that role? Stay tuned to DOOL and don’t forget to check CDL often for the latest Days of Our Lives spoilers, updates, and news.