BY hellodrdavis on April 7, 2019 | Comments: one comment
Related : Days of Our Lives, Soap Opera, Spoiler, Television 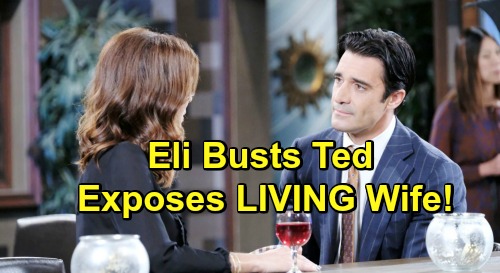 Days of Our Lives (DOOL) spoilers tease that Eli Grant (Lamon Archey) will be feeing suspicious. Eli’s a good detective, and he’ll notice that something just isn’t right about Salem’s interim DA, Ted Laurent (Gilles Marini). As a general rule, Ted tends to rub people the wrong way with his brash comments and history as a criminal defender, and Eli has never really liked the guy.

Of course, Eli is all about “Team Rope,” and he’d like to see Rafe Hernandez (Galen Gering) and Hope Hernandez (Kristian Alfonso) work through their marital difficulties and come out stronger. Eli hasn’t been too happy to see Ted hanging around Hope so much in recent weeks, and he’s made no bones about that. He also hasn’t been keen on Rafe’s decision to go running whenever Sami DiMera (Alison Sweeney) or Jordan Ridgeway (Chrishell Hartley) calls.

According to DOOL spoilers, Eli will detect something new about Ted that doesn’t sit well with him. Eli will happen to overhear a discussion between Ted and Hope, during which Ted will profess his love for Hope and press her to leave Rafe for him. It may be something during this conversation that Eli hears that gets him intrigued.

We can’t help but wonder whether the thing that gets Eli suspicious will concern Ted’s allegedly deceased wife. Ted would like everyone to believe that his wife died several years ago, but in a recent conversation with Diana Colville (Judith Chapman), it seemed that Ted might be perpetrating a big lie. Viewers will remember that Diana told Ted that she thought she had bumped into his wife just a few months ago.

So, that sets up an intriguing possibility. Ted could be a very married man who is lying to everyone, and especially to Hope, about his relationship status. And if Eli were to discover something that led to that revelation, it could open up Hope’s eyes to Ted’s deceiving ways. Right now, Hope is vulnerable to Ted’s advances, and DOOL spoilers say that she won’t immediately reject Ted’s suggestion that she leave Rafe to be with him.

Eli could end up being the person who busts Ted’s lies wide open and saves Hope from making a huge mistake. Would you like to see that happen? Stay tuned to DOOL and don’t forget to check CDL often for the latest Days of Our Lives spoilers, updates, and news.