Days of Our Lives Spoilers: Ted Declares His Love To Hope – Marriage To Rafe Crumbles, Ends In Divorce?

BY hellodrdavis on March 31, 2019 | Comments: one comment
Related : Days of Our Lives, Soap Opera, Spoiler, Television 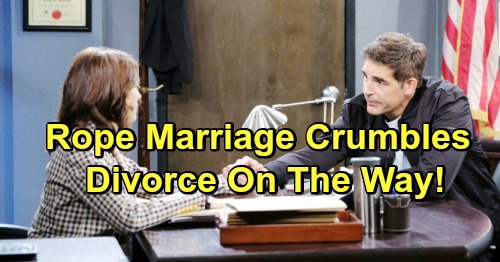 Days of Our Lives (DOOL) spoilers tease that Hope Hernandez (Kristian Alfonso) will suffer a devastating blow in the coming days. She and Rafe Hernandez (Galen Gering) had worked through their issues and seemed to come to a new understanding on their anniversary. It took a while for Hope to get over the fact that Rafe had run to Europe to help Sami DiMera (Alison Sweeney), but eventually Hope did get past it and she and Rafe were back on solid ground.

But now Rafe is going to get wrapped up in drama with another one of his exes…Jordan Ridgeway (Chrishell Hartley). According to Days of Our Lives spoilers, Rafe will take off for California to retrieve Jordan’s baby boy, and Hope won’t be pleased. What’s worse, when he comes home with the baby, he’ll announce his intentions to take care of the little boy! Hope won’t be thrilled by these developments to say the least.

To Hope, Rafe’s actions will signify that their marriage doesn’t come first to him. It seems that every time Hope turns around, Rafe is leaving her to go help some other woman with her problems, rather than staying put and working on his marriage. Hope feels like she doesn’t come first with Rafe, and it really hurts her. She’ll be feeling abandoned and vulnerable thanks to Rafe once again. 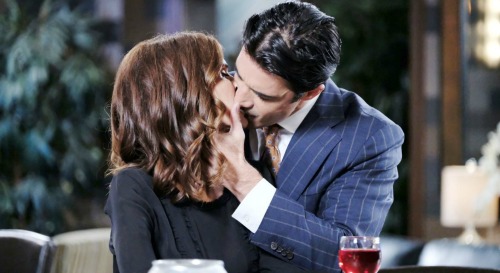 And of course, while all of this is going on, Ted Laurent (Gilles Marini) will be hovering around Hope, offering his support and friendship. Ted really knows how to pounce when things are at their worst for Hope, and he’ll be there for her when he knows Rafe can’t be.

Days of Our Lives spoilers indicate that Hope will willingly accept Ted’s help in Rafe’s absence, and that she’ll even open up to him. Does this mean that she’ll openly discuss her marriage and the problems she and Rafe are having with Ted? It certainly looks like that may be the case, and if she does, then that will give Ted the opportunity to play the hero who is there for Hope when Rafe refuses to be.

And things will go even farther than that. According to Days of Our Lives spoilers, while Rafe’s away, Ted will make a huge declaration. He’ll tell Hope that he is falling in love with her, and he’ll plant a big kiss on her, right out in the open at Doug’s Place! And from the looks of the Days previews, Hope will get caught up in the moment and will kiss Ted back, at least at first.

This will likely leave Hope more confused than ever. She’s been largely in denial about what’s been going on between herself and Ted, insisting to Rafe and to Jennifer Horton (Melissa Reeves) that she “can handle Ted,” but after Ted declares his love for her and she kisses him back, she won’t be able to ignore the problem any longer.

And so Hope will do some serious thinking about her marriage to Rafe. Days of Our Lives previews show Hope telling Rafe that she’s not sure she wants to stay in the marriage. Of course, she will probably base her comments on Rafe’s behavior and keep the kisses with Ted, and Ted’s declaration of love for her, to herself. None of this bodes well for “Rope’s” stale marriage, and we may be looking at an impending divorce.

Do you think there’s any way that Hope and Rafe’s marriage can survive at this point? Stay tuned to DOOL and don’t forget to check CDL often for the latest Days of Our Lives spoilers, updates, and news.