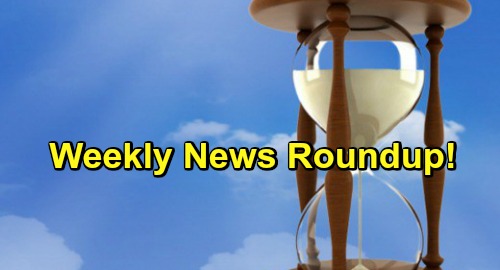 Days of Our Lives (DOOL) spoilers and weekly news roundup reveal that there’s been plenty to talk about in the soap world lately. We’ve got a news roundup to pass along, so let’s take a look at the hottest stories and all the buzz they’ve created. First, let’s talk about two recent departures and how they might affect another popular daytime drama.

Greg Rikaart wrapped his run as Leo Starke along with his TV mom, Diana Cooper (Judith Chapman). Both characters have finished airing – for now at least. In an interview with Soap Opera Digest, Rikaart weighed in on if he’d ever return to the NBC soap. “Oh, in a heartbeat,” the actor assured fans. If Days wants him back, they know where to find him!

Of course, Rikaart also plays the role of Kevin Fisher on The Young and the Restless. If you didn’t know already, Chapman also portrays his mom in Genoa City. She brings the glamorous Gloria Bardwell to life whenever she pops up over there. Now that Rikaart and Chapman are done at DOOL, could they be headed back to Y&R? If so, you can bet many Young and the Restless viewers would be thrilled.

We’ve got some recast confirmation to share, too. You’ve probably heard by now that Robin Strasser has joined the Days of Our Lives cast. There was speculation early on that Strasser would be a Vivian Alamain recast. Now that speculation has been confirmed as fact. DOOL fans will indeed see Strasser step into the role of Vivian, which was vacated by Louise Sorel.

In other Days news, Casey Moss (JJ Deveraux) has a great new project in the works. He recently shot scenes for a short film called Circle. Moss portrays a character named Chris Hardy in this short, which is currently in post-production. The film also stars Michael John Madden as Ben Hamilton, who ends up lost in the desert with Chris.

Finally, Martha Madison (Belle Brady) posted a sweet pic on her Twitter account and filled fans in on something fun. She said, “I spent a lovely afternoon with the extended family! The only thing missing was @DeidreHall! #AuntSamantha #TVAunt #NotAnEvilTwinAtAll.” Madison was hanging out with Deidre Hall’s (Dr. Marlena Evans) real-life twin sister, Andrea Hall, who once played Samantha Evans on the NBC soap.