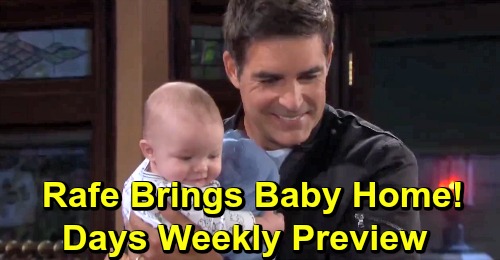 Days of Our Lives (DOOL) spoilers for the week of April 1-5 tease that some shockers are brewing in Salem. First, JJ Deveraux (Casey Moss) will decide Claire Brady’s (Olivia Rose Keegan) lighter is just too suspicious for his taste. He may not be a detective anymore, but he’s still got all the right instincts.

Claire will grow concerned when she learns JJ intends to take that lighter to the police station. He’ll want to turn it over as evidence and have it analyzed, so that’s obviously a big deal. Of course, Claire will also have to worry about Tripp Dalton’s (Lucas Adams) impending marriage to Haley Chen (Thia Megia). She’ll be desperate to stop it with recorded proof that it’s a sham.

Claire will need Eve Donovan’s (Kassie DePaiva) help to make it happen, which is why she’ll be frustrated when her partner in crime is uncooperative. Eve wants Haley to be deported as much as Claire does, but she may make something else the priority. Days spoilers state that Eve will deliver stunning news at a rally, but it may be about her own impending marriage instead!

DOOL fans can definitely expect a wedding announcement for Eve and Jack Deveraux (Matthew Ashford) soon. Rafe Hernandez (Galen Gering) will also have an announcement to make, but Hope Hernandez (Kristian Alfonso) isn’t going to like it. He’ll reveal that he plans to go find Jordan Ridgeway’s (Chrishell Hartley) baby in California, but Hope will be fed up with his constant need to assist his exes.

Nevertheless, Days of Our Lives spoilers say Rafe won’t want to let Jordan down. He’ll indeed track down her infant son and bring him to Salem, but Ted Laurent (Gilles Marini) will make some moves on Hope in the meantime. After Rafe comes home with the kid, Eli Grant (Lamon Archey) will fret over Lani Price’s (Sal Stowers) attachment to little David, who shares the same name as their deceased child.

Other Days of Our Lives spoilers say Kate Roberts (Lauren Koslow) will get in touch with Victor Kiriakis (John Aniston). She’ll have a business proposition to pass along, so we’ll see how Victor responds to it. Next, Will Horton (Chandler Massey) and Sonny Kiriakis (Freddie Smith) will try to figure out what caused Will to fall ill. They’ll be stumped as they seek answers about his medical mystery.

Elsewhere, Rex Brady (Kyle Lowder) will have a chat with Maggie Kiriakis (Suzanne Rogers). She’ll give Rex a warning, so this will undoubtedly be about protecting Sarah Horton’s (Linsey Godfrey) heart. Sarah is now fully committed to Rex, but that’s only because Eric Brady (Greg Vaughan) isn’t an option. However, Eric will battle temptation over whether he should come clean this week.

It sounds like some great drama’s ahead in Salem. We’ll give you updates as other Days details emerge. Stay tuned to DOOL and don’t forget to check CDL often for the latest Days of Our Lives spoilers, updates and news.