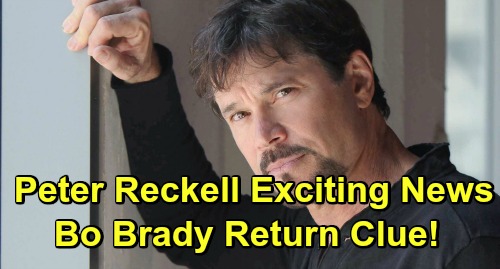 Days of Our Lives (DOOL) spoilers tease that one NBC soap star is working on an exciting project – and it could give DOOL fans some hope for the future. On Instagram, an actress named Iris Almario posted a pic of herself along with someone Days viewers will recognize. It turns out Peter Reckell (ex-Bo Brady) scored a directing gig and Almario was one of the stars who worked under his guidance.

The thrilled actress added a caption about her experience. “So fun being directed by Peter Reckell aka soap opera royalty,” Almario said. “Who else remembers him as Bo Brady from #DaysofOurLives Super Couple Bo & Hope? #bope It was a total treat for me to geek out about acting with him. He loves the magic & journey of storytelling which is music to my ears. Feeling inspired. Thanks Peter.”

We’re always happy to see DOOL alums working, so this is obviously great news on its own. However, this could also serve as a hint about Reckell’s potential Days of Our Lives comeback. It just requires putting a few puzzle pieces together to reach that conclusion.

Almario didn’t reveal the name of the film or TV series she was working on. This project probably has nothing to do with Days, but it’s interesting that Reckell seems to be in Los Angeles. He doesn’t live in LA, so he might be juggling a few things while he’s out there.

Could Days have asked to meet with Reckell about a return stint? It’s possible, especially since Ron Carlivati has been in LA as well. Carlivati doesn’t call Los Angeles home either, so…Reckell’s visiting…Carlivati’s visiting…you get the idea! It wouldn’t be unreasonable to think everyone gathered for a meeting of the minds.

Of course, Days fans may not want to get their hopes up just yet. It’s best to be cautiously optimistic, but it’s certainly worth thinking about. Many DOOL viewers would love to see Bo Brady in Salem again. Whether he returned in in spirit form or came back from the dead in a soapy twist, we’d be ecstatic to see him onscreen. Bo is missed and needed on the NBC soap!

Making myself at home… #days pic.twitter.com/eCSIDyzJQB

So fun being directed by Peter Reckell aka soap opera royalty. 📺🎥 Who else remembers him as Bo Brady from #DaysofOurLives Super Couple Bo & Hope? ❤️ #bope It was a total treat for me to geek out about acting with him. He loves the magic & journey of storytelling which is music to my ears. 😊 Feeling inspired. Thanks Peter. 🎬 #actorslife @nbcdays