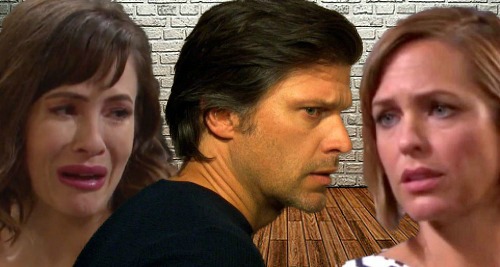 Days of Our Lives (DOOL) spoilers tease that Eric Brady (Greg Vaughan) will face some bombshells. He’s determined to fight his feelings for Sarah Brady (Linsey Godfrey) since she’s married to Rex Brady (Kyle Lowder). Eric believes that’ll be easier now that they’re moving out, but Sarah will accidentally expose where her heart truly lies. Her slip-up will lead her to make a full confession to Rex.

Of course, Rex has either been in denial or just isn’t too bright. Maybe it’s a little of both! Regardless, Rex will have to accept what’s been staring him in the face the whole time. Eric and Sarah have feelings for each other, so they’ll all have to tackle that.

Days of Our Lives spoilers say Rex is set to leave Salem down the road, so he won’t be the winner of this love triangle. However, it doesn’t seem like Sarah will be the winner either. Eric may be the man of her dreams, but she’s just Eric’s backup love interest. Nicole Walker (Arianne Zucker) is the one Eric truly wants.

Many DOOL viewers are eager to see Eric move beyond the Rex and Sarah drama. That’s especially true for “Ericole” fans. Eric and Nicole need their happy ending with Holly Jonas (Harlow and Scarlett Mallory) eventually. No couple’s happy forever on a soap, but the “Ericole” family has earned a good dose of bliss.

Before we get to cloud nine for Eric and Nicole, Eric has to find out the real one isn’t even in town! Days of Our Lives spoilers say Eric will get a huge clue next week. He’ll be taken aback when he learns “Nicole” has married Tony DiMera (Thaao Penghlis). Grief can make people do crazy things, but this will surely seem extreme to Eric. He may become even more suspicious of the changes in “Nicole.”

Eric should be able to figure out that “Nicole’s” only doing this as a powerplay, but he still won’t think this feels like the woman he loved so much. Will Eric be convinced something else is up? It’d be great if Eric could do some eavesdropping and get a clearer hint. If anyone’s going to bring Nicole and Holly home, it deserves to be Eric. To start, he just needs confirmation that this “Nicole” isn’t the real deal.

Days may not offer that just yet, but let’s hope it’s coming soon. Eric is fantastic in hero mode, so he needs to leap into action and save the day. We’ll give you updates as other Days news comes in. Stay tuned to DOOL and don’t forget to check CDL often for the latest Days of Our Lives spoilers, updates and news.