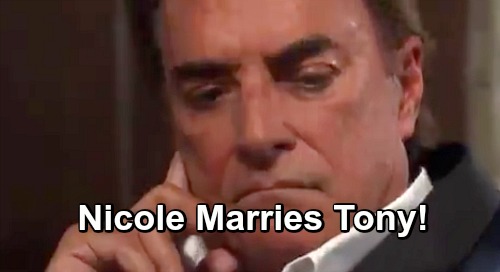 Days of Our Lives (DOOL) spoilers tease that Kristen DiMera (Stacy Haiduk) will decide to take some drastic action in order to get her hands back in her family company. As DOOL viewers know, Kristen is back and posing as Nicole Walker (Arianne Zucker), complete with a “Nicole” mask. She has been desperately trying to get back into the family business, starting by asking her little brother Stefan DiMera (Brandon Barash) for a job.

But that endeavor didn’t go so well. “Nicole” ended up seriously clashing with Gabi Hernandez (Camila Banus), both of whom have their own ideas for how DiMera should allocate company resources. Gabi is all about her DiMera-owned company, GabiChic, while “Nicole” wants the family business to invest heavily in Basic Black. The women have clashed big time over this.

Of course, Kristen’s ultimate goal is to somehow get the family business and DiMera empire away from Stefan, whom she feels is running DiMera into the ground. But she’s had a major setback – Stefan ended up firing “Nicole” from Basic Black, and now Kristen’s out of the family company entirely.

Well, according to DOOL spoilers, Kristen will seek out an ally to combat Stefan. As it turns out, Tony DiMera (Thaao Penghlis) is very much alive, and Kristen will reach out to him to help her save the company. But it sees that she’ll do so as “Nicole,” which should make for an interesting situation. Exactly how it all goes down remains to be seen, but it seems that “Nicole” will approach Tony and want him to help her take down Stefan.

Days of Our Lives spoilers say that “Nicole” will propose a big solution to the Stefan problem…marriage between herself and Tony! Now, whether Tony will realize that “Nicole” is actually Kristen is unclear at this point, but it certainly seems that one of the big marriages promised by TPTB this summer on DOOL will be “Nicole” and Tony!

It’s going to be an interesting situation, since DOOL spoilers also indicate that Stefan and Gabi are going to get married soon as well. It looks like we’ll see a big fight for DiMera between Stefan/Gabi and Tony/“Nicole”going forward. And we can only assume that Stefan’s world is going to be rocked by the reappearance of his brother Tony to the Salem scene.

It sounds like we’re in for an interesting ride as Stefan deals with an extraordinary challenge against his brother and (unbeknownst to him) his sister! Which couple do you think will win the battle over DiMera Enterprises and the family fortune? Stay tuned to DOOL and don’t forget to check CDL often for the latest Days of Our Lives spoilers, updates, and news.