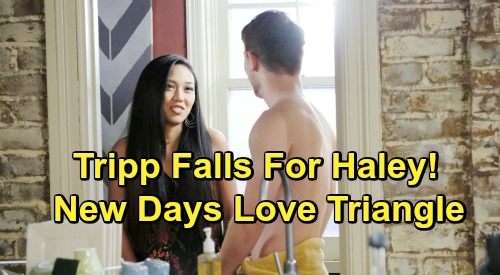 Days of Our Lives (DOOL) spoilers tease that JJ Deveraux (Casey Moss) may rue the day that he and Haley Chen (Thia Megia) decided to move into the loft with Tripp Dalton (Lucas Adams). As DOOL viewers know, JJ got evicted from his apartment after his landlord objected to his living there with Haley, and Tripp was kind enough to offer them Claire Brady’s (Olivia Rose Keegan) old room at his loft. JJ and Haley happily accepted, but it looks like some conflicts will ensue.

First off, DOOL spoilers say that Haley’s going to experience some freaky visions of Claire. Claire previously tried to kill Haley and Tripp by setting the Horton cabin on fire, and it was understandably a traumatic experience for Haley. She’ll end up having a frightening nightmare involving Claire tossing a match onto her bed while JJ’s away.

It looks like Tripp will hear Haley’s screams and rush to her side. Haley will feel comforted by Tripp and their bond will strengthen. Of course, they’ve already been through a lot together, since they were previously married as a means of keeping Haley in the country.

It seems that at least for Tripp, feelings will start to develop for his ex-wife as he realizes after she has some terrifying hallucinations of Claire that she’s probably showing signs of post-traumatic stress disorder (PTSD).

It’s great that Tripp wants to help Haley, but it seems that Haley won’t want to tell JJ about her hallucinations of Claire – she may not want to worry JJ about her psychological health, especially since she attempted suicide last year.

She’s of course not suicidal now, but he probably won’t want to concern JJ and make him worry. At any rate, Tripp will remain concerned about her, and he’ll go to great lengths to help her.

According to Days of Our Lives spoilers, Haley will want to keep her PTSD issue quiet, not only from JJ but from everyone else, too. Given that she just got her job back at University Hospital, she won’t want to admit to anyone that she’s experiencing problems, and so Tripp will decide to help her out. He’ll approach Dr. Henry Shah (Andre Khabbazi) at the hospital and ask for tranquilizers supposedly for himself, but he’ll give them to Haley instead.

The tranquilizers will apparently do the trick and allow Haley to get some much-needed rest without experiencing nightmares or hallucinations of fire-starting Claire. That will be a positive development, but Days spoilers also say that when the tranquilizers kick in, Haley will fall asleep in Tripp’s arms as he’s comforting her. And that’s a sign of trouble.

It looks like we may be seeing a new love triangle forming at the loft, as Tripp starts to realize that he has very real feelings for Haley. At first, he may believe that he’s simply feeling protective of Haley, given everything they’ve been through together, but at some point, he’ll start to realize that what he’s feeling is much deeper than friendship or protectiveness.

We’ll see what happens with Tripp, Haley, and JJ going forward, but look for some major awkwardness as Tripp struggles with his feelings and JJ remains oblivious to his roomie’s growing feelings for his girlfriend. Do you think that Tripp will be able to keep his feelings in check? Stay tuned to DOOL and don’t forget to check CDL often for the latest Days of Our Lives spoilers, updates, and news.