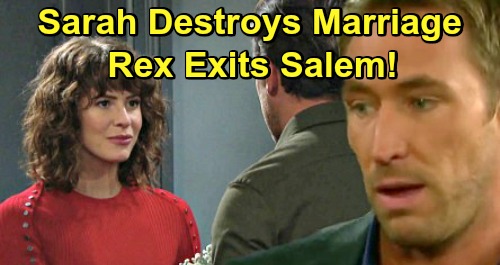 Days of Our Lives (DOOL) spoilers tease that Sarah Horton (Linsey Godfrey) is in for some heartache ahead. She’s created a big mess in her life recently, and soon everything will come to a head. As DOOL viewers know, Sarah has strong feeling of love for Eric Brady (Greg Vaughan), but she’s married to his brother Rex Brady (Kyle Lowder). She’s done her best to turn off her feelings for Eric, but it’s been difficult.

Turns out, Sarah has had feelings for Eric for some time now, but she’s largely refrained from acting on those feelings due to her respect for Rex, Eric’s love for Nicole Walker (Arianne Zucker), and some serious misunderstandings between herself and Eric along the way. Still, she and Eric constantly gaze at each other and they’ve had several kisses and near-kisses along the way.

Well, it seems that something’s going to have to give. As DOOL viewers may know, Kyle Lowder, who portrays Rex, is leaving the show. His last airdate is August 9, 2019, so things are going to need to wrap up between his character and Sarah very soon.

Perhaps Sarah will make a big misstep and say Eric’s name while attempting to declare her love for Rex, or perhaps during a moment of intimacy. At any rate, DOOL spoilers say that she’ll somehow reveal to Rex how she really feels about Eric. And we have to imagine that it’s going to lead Rex and Sarah’s marriage to implode big time.

Days viewers will remember that Rex has a baby with Mimi Lockhart (Farah Fath Galfond), and that Mimi and the baby currently reside in Chicago. It would be fitting if, after learning of Sarah’s true feelings, Rex winds up leaving Salem and heading to Chicago to be near his daughter and rebuild his life.

We’ll see how it all goes down, but that scenario seems pretty likely according to Days buzz. Do you think Rex will walk out on Sarah after her feelings for Eric are out in the open? Stay tuned to DOOL and don’t forget to check CDL often for the latest Days of Our Lives spoilers, updates, and news.