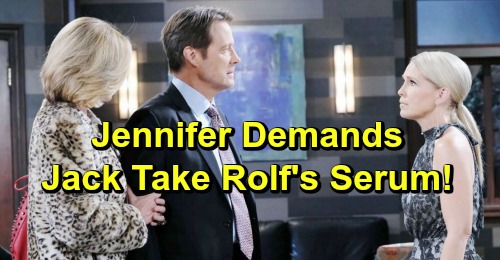 Days of Our Lives (DOOL) spoilers tease that Eve Deveraux (Kassie DePaiva) will have to face the day that she hoped would never come. Several months ago, Eve perpetrated a sneaky move when she broke into the hospital administrator’s office and stole Dr. Wilhelm Rolf’s (William Utay) diary.

As DOOL viewers know, that diary contains the formula for the memory recovery serum that could give Jack Deveraux (Matthew Ashford) his memories back, and Eve would do just about anything to prevent that, because she knows that Jack would dump her in a New York minute if he regained all of the memories of his life with Jennifer Horton (Melissa Reeves).

But in an unfortunate turn of events for Eve, Xander Cook (Paul Telfer) found out that she was in possession of Rolf’s diary, and he in turn stole the valuable commodity from Eve. Eve was under the impression that Xander would keep the diary under tabs, but in a weird turn of events, Xander decided to fork over the diary to Maggie Kiriakis (Suzanne Rogers) and Sarah Horton (Linsey Godfrey), in attempt to be the hero in their eyes.

And that’s what Eve hoped would never happen. Although she’s relieved that the diary will be used for a charitable purpose – to save Will Horton’s (Chandler Massey) life – she’s not happy that the memory recovery formula will now be potentially available to Jack.

But according to Days of Our Lives spoilers, there will be someone who will be overjoyed that the formula has resurfaced, and that’s Jennifer. Jennifer is already excited that Jack seems to be slowly remembering things about their past together, but she’d like to push that process along.

Of course, Jennifer wants nothing more than to get the real Jack back and get Eve as far away from him as possible. And she knows that the memory serum is key to making that happen, so she’ll start working on Jack to get him to get the deadly serum formulated and use it on himself.

And that’s going to outrage Eve, who will surely fight Jennifer’s attempts to get Jack to use the serum. Eve won’t want to lose Jack, and she’ll probably argue that the serum is too risky to even try one time…and she’ll have a point. After all, Will developed a life-threatening brain tumor after injecting himself with the serum just two times.

But knowing Jennifer, she won’t back down in her quest to get Jack to try the serum. She’ll probably point out that an antidote was developed for Will’s brain tumor, so the risks are really quite small. But ultimately it will be up to Jack to decide whether he wants to try to regain his memories, and his decision will affect both Jen’s and Eve’s lives.

What do you think Jack will decide to do? Will he give Rolf’s memory recovery serum a try? Stay tuned to DOOL and don’t forget to check CDL often for the latest Days of Our Lives spoilers, updates, and news.