BY hellodrdavis on March 17, 2019 | Comments: one comment
Related : Days of Our Lives, Soap Opera, Spoiler, Television 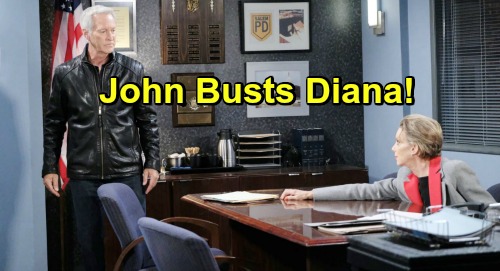 Days of Our Lives (DOOL) spoilers tease that Diana Cooper’s (Judith Chapman) luck will soon run out. She put a devious plan in place to get rid of Marlena Evans (Deidre Hall), and so far it has worked out pretty well for her. With some help from one of the hospital nurses, Diana hacked into Marlena’s computer and discovered that she was allergic to penicillin.

And after dosing Marlena with penicillin-laced macaroons, Diana seemed to have the upper hand, and Marlena was on death’s door.

But John Black (Drake Hogestyn) isn’t one to just sit by and let someone try to kill his beloved “Doc.” He wants to get to the bottom of the situation and hold the guilty party accountable, and he’s skeptical that the culprit was either Haley Chen (Thia Megia) or Kristen DiMera (Stacy Haiduk). He doesn’t necessarily doubt that Kristen could be alive, but it all seems just a bit too perfectly packaged for his liking.

Plus, John knows that Diana is not the person that she used to be. She’s changed, and Marlena has warned John about Diana’s devious ways. John may not like the possibility, but according to Days of Our Lives spoilers, he’ll soon start to suspect that Diana might have poisoned Marlena in order to have him all to herself.

According to DOOL spoilers, Diana will soon start to suspect that she may have left incriminating evidence behind at the scene of the crime. Exactly what she may have left behind remains to be seen, but whatever it is will have her very worried. It will also point John in her direction, and she’ll worry when John wants to question her about what happened to Marlena.

Of course, Diana’s very devious, and she probably won’t have any problem lying directly to John’s face about what she did, but it seems that John will have the evidence he needs to know that Diana is the guilty party. Days of Our Lives spoilers say that he’ll furiously confront Diana over Marlena’s poisoning, but will she break and actually admit to what she’s done?

She might, especially if John’s got hard evidence on her. We could see her tearfully admitting what she did and appealing for John’s mercy because she only did it because she loves him. We could also see her begging John not to turn her in to the authorities for the sake of their son, Leo Starke (Greg Rikaart). It would be just like Diana to pull the “don’t let your son lose his mother” card on John to invoke sympathy and keep herself out of jail.

We’ll see exactly what John does after he furiously confronts Diana about what she did. There are currently no plans for Diana to leave Salem, and it’s doubtful that she’d be carted off to jail for long, so something’s probably going to give.

Are you looking forward to seeing Diana get busted for what she did? Stay tuned to DOOL and don’t forget to check CDL often for the latest Days of Our Lives spoilers, updates, and news.