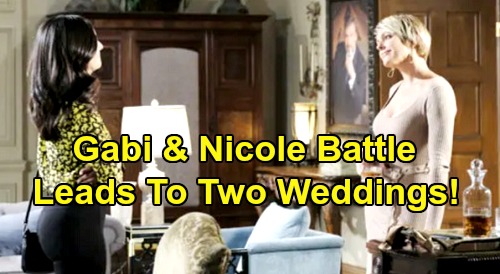 Days of Our Lives (DOOL) spoilers tease that things will really start heating up in the battle for DiMera Enterprises. As DOOL viewers know, Kristen DiMera (Stacy Haiduk) wants nothing more than to regain control of her family company.

She’s been away far too long and feels that it’s time to take the company away from Stefan DiMera (Brandon Barash). But Stefan isn’t about to step away from the company, so a battle will ensue.

Of course, a big problem for Stefan right now is that he’s in loads of legal trouble. He’s been falsely accused by Kate DiMera (Lauren Koslow) and Ted Laurent (Gilles Marini) of masterminding their kidnapping. Thankfully for Stefan, he’s now out on bail, but he will probably be in big trouble with the DiMera board, who probably won’t want him at the helm of the company in light of his arrest scandal.

It looks like that will set the stage for the DiMera board to look for a new CEO, at last for the time being. And that’s going to be a tricky situation, since as far as Stefan and the board know, there’s no other DiMera around to be appointed to the position. Chad DiMera (Billy Flynn) is out of the country and may not even be interested in the position, so who does that leave?

Well, it leaves Kristen as a potability, but of course no one knows that Kristen is alive – she’s been masquerading around Salem in a mask to make her look like Nicole Walker (Arianne Zucker), and she recently tried to infiltrate DiMera Enterprises by getting Stefan to hire her as “Nicole.”

But that plan fizzled when Stefan fired her. But Kristen will have another plan. According to Days of Our Lives spoilers, “Nicole” will seek out a presumed-dead Tony DiMera (Thaao Penghlis) for help… and marriage!

Kristen DiMera Will Have Competition For The Position She Seeks

She’ll likely assume that Tony would want to help with the family company, and she’ll convince Tony to marry her. DOOL spoilers also indicate that “Nicole” will want to use her newfound status as Mrs. Tony DiMera to become the DiMera CEO!

Perhaps being a DiMera by marriage is all one needs to become CEO, because DOOL spoilers also say that Gabi is going to both marry Stefan and seek the CEO position herself! It seems that we’ll have a battle between Gabi and “Nicole” for the CEO position, and it looks like it’s going to get fierce!

It should be interesting to watch the two ladies – who absolutely don’t get along – duke it out over the position. There’s likely to be a serious clash as they each try to manipulate their way into the top spot at DiMera.

Are you looking forward to a good Gabi vs. “Nicole” battle? Stay tuned to DOOL and don’t forget to check CDL often for the latest Days of Our Lives spoilers, updates, and news.