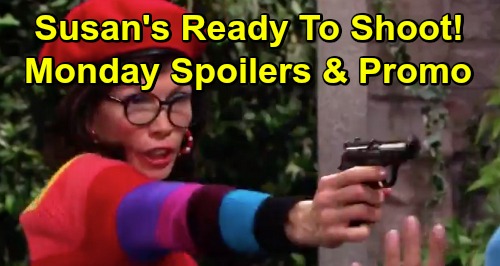 Days of Our Lives (DOOL) spoilers for Monday, July 22, tease that Kristen DiMera (Stacy Haiduk) will have some choice words – as well as a few threats – for her partner in crime Xander Kiriakis (Paul Telfer). These two have just met up in the park and Kristen – who is disguised as Susan Banks (Stacy Haiduk) – is itching to get her “Nicole Walker” (Arianne Zucker) mask back.

But unfortunately for Kristen, Xander won’t have the mask to give back, since Gabi Hernandez (Camila Banus) ran off with his briefcase, which had the mask in it. Still, it seems that he’ll make Kristen grovel a bit, and she may actually get the mask back at some point, since Gabi handed the briefcase over to Brady Black (Eric Martsolf).

Meanwhile, Will Horton (Chandler Massey) and Sonny Kiriakis (Freddie Smith) will be stunned to find Susan at the front door of the Kiriakis mansion. As DOOL viewers know, they just had a major run-in with Kristen, who was posing as Susan, so they’ll be confused and experience some major deja vu.

Of course, they may just chalk up the occurrence to Susan being generally strange and eccentric, and it seems that Susan will eventually get away from the mansion and wind up in the park, where she’ll be shocked to encounter a familiar face…her own! According to Days of Our Lives spoilers, she’ll bump into Kristen who is posing as her, and chaos will ensue. Look for Susan to pull a gun on her “twin!’

Next, on the new episode of DOOL on Monday, July 22, Gabi will have some disappointing news for Stefan DiMera (Brandon Barash). She’ll have to report that they’re back at square one when it comes to figuring out who was really behind Ted Laurent (Gilles Marini) and Kate Dimera’s (Lauren Koslow) kidnapping. They suspect it was “Nicole,” and they’ll surely keep working on solving the mystery of why Nicole would want Ted and Kate to disappear.

Next, Kate will make a big misstep when she conks her daughter-in-law Sarah Horton (Linsey Godfrey) over the head. According to DOOL spoilers, the attack will be accidental, so it looks like Kate may think that she’s attacking an intruder. Kate might get spooked and think that Kristen or one of her goons is after her! At any rate, Sarah will wind up with a bump on the head.

Finally, on Monday’s new episode of Days of Our Lives, Marlena Evans (Deidre Hall) and Roman Brady (Josh Taylor) will find themselves at odds. They’ll sit down for a chat at the pub and hash things out – at any rate, these exes tend to get along just fine most of the time, so we expect that they’ll work things out between them.

It sounds like a lot of DOOL drama is heating up for Monday’s episode, so stay tuned! We’ll give you updates as DOOL news comes in. Stick with the NBC soap and don’t forget to check CDL often for the latest Days of Our Lives spoilers, updates, and news.