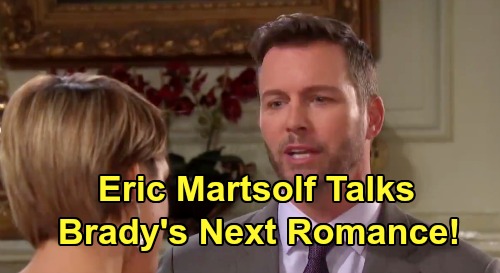 Days of Our Lives (DOOL) spoilers tease that Brady Black (Eric Martsolf) will remain unlucky in love. He’s currently being pursued by his crazy ex, Kristen DiMera (Stacy Haiduk) – although he doesn’t know it yet. At the moment, Brady just thinks “Susan Banks” (Stacy Haiduk) is more off her rocker than usual. He also believes “Nicole Walker’s” (Arianne Zucker) grief is influencing her own bizarre behavior.

DOOL fans can expect “Nicole” to marry Tony DiMera (Thaao Penghils) during the week of July 26-August 2. However, that doesn’t mean Kristen will want Brady any less. She’ll undoubtedly plan to revisit her romantic scheme once the situation at DiMera Enterprises is squared away. Kristen’s top prize is Brady, so she won’t forget about winning him over. She just has to use Tony to her advantage first.

Once “Nicole” revisits her Brady plot, will he be more open to the idea of being with her? In an interview with Soap Opera Digest, Eric Martsolf talked about Brady’s love life and some of the problems he’s facing. For starters, Brady’s lonely deep down. He needs a stable relationship with someone sane, loyal and honest – and Days viewers know he hasn’t had that in a long time.

“I think he harbors hope for a loving relationship in general,” Martsolf said. “As an addict, he’s constantly going with his heart, not fully thinking things out. He gets engaged at the drop of a hat.” That’s certainly been true for Brady in the past, but he’s trying to stay strong for Eric Brady’s (Greg Vaughan) sake right now. He doesn’t want to cross the line and reignite this brother battle.

Even so, the heart wants what it wants – especially if that heart is a little wild like Brady’s. He can’t control how he feels, and things can change quickly on Days of Our Lives. Martsolf admitted that part of Brady is hoping this “Bricole” reunion pans out.

“Nicole is definitely someone he has a tremendous history with, and he is hopeful,” Martsolf said. “He is hopeful that Nicole is serious and this may work but again, he’s so conflicted because he doesn’t want to disrupt his relationship with his brother.”

Martsolf added that Brady’s just a guy who’s in desperate need of love. It’s just difficult for Brady to find “normal people” to pair up with in a town like Salem! Brady obviously isn’t meant for “Nicole” since she’s actually Kristen. As for the real Nicole, she’ll probably be all about Eric when she finally returns.

Still, the ideal love interest has to be out there for Brady. He deserves some happiness after all these years of failed Days romances! Who would you like to see Brady become a couple with? Do you think Brady’s perfect match is in Salem or should they bring in someone new?