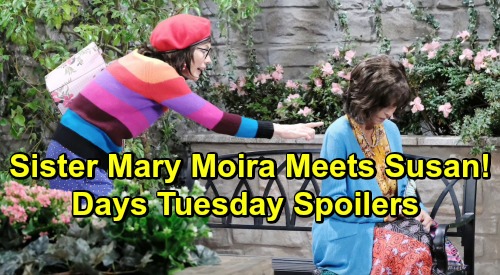 Days of Our Lives (DOOL) spoilers for Tuesday, July 23, tease that Susan Banks (Stacy Haiduk) will blow her top over the doppelganger sighting in the park. She naturally assumes it’s Kristen DiMera in disguise – and she’s exactly right. Susan will pull out the gun Sonny Kiriakis (Freddie Smith) and Will Horton (Chandler Massey) gave her and wave it in Kristen’s face. She’ll threaten her lookalike, but things will calm down soon enough.

Kristen will think fast and blurt out an explanation that satisfies Susan. She’ll claim she’s Sister Mary Moira Banks (Stacy Haiduk), so a confused Susan will have more questions. Days spoilers say “Sister Mary Moira” will lie that she left the convent and met a guy she’s interested in. That news will thrill Susan, who’ll lower her weapon and most likely assure “Sister Mary Moira” it wasn’t loaded anyway.

Days spoilers state that Xander Cook (Paul Telfer) will eventually return with Kristen’s mask. After Susan’s gone, Xander will hand it over and make it clear that this concludes their business together. He won’t want to be tangled up in Kristen’s mess anymore, so he’ll warn Kristen not to underestimate him again – or else her “Nicole” scheme will be exposed.

Kristen won’t be happy about her former ally’s intimidation tactics, but she’s just as sick of dealing with Xander at this point. She’ll turn her attention back to her goals and leave Xander alone for now. Meanwhile, Days of Our Lives spoilers say Stefan DiMera (Brandon Barash) will seek an agreement. He just showed up at Kate Roberts’ (Lauren Koslow) hotel room, so she’s about to hear an intriguing pitch.

DOOL fans can expect Stefan to do some bargaining. He obviously knows Kate’s lying and suspects “Nicole Walker” (Arianne Zucker) has something to do with it. Stefan will try to pry the truth out of Kate and perhaps convince her that they can help each other. He’s desperate to get off the hook for this bogus kidnapping, but Kate has to be careful about how she proceeds.

Kate’s life is on the line and so are the lives of her children. She’s planning to take down Kristen with Ted Laurent’s (Gilles Marini) help, but the situation’s already getting tricky. Days of Our Lives spoilers say Lani Price (Sal Stowers) will grill Ted about his iffy statement on Tuesday. She’ll try to trip Ted up with the inconsistencies, but he’ll do his best to smooth over any rough patches.

Kate and Ted will avoid disaster for the time being, but trouble’s brewing. Lani will keep digging, so the deceptive partners will have to watch their backs! Finally, Sarah Brady (Linsey Godfrey) and Rex Brady (Kyle Lowder) will make a firm decision about their future. They’ll plan to let Eric Brady (Greg Vaughan) know they’re moving out and hope they haven’t overstayed their welcome.

Part of Eric should be relieved that he won’t have Sarah around to tempt him anymore, but another part of him will miss her company. This love triangle is set to explode after Sarah makes a major confession to Rex next week. We’ll give you updates as other Days details emerge. Stay tuned to DOOL and don’t forget to check CDL often for the latest Days of Our Lives spoilers, updates and news.