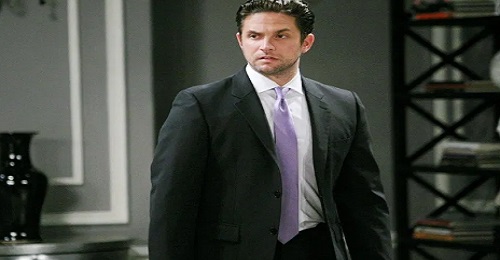 Days of Our Lives (DOOL) spoilers reveal that Stefan DiMera (Brandon Barash) is set to make his exit from the NBC soap soon. The show films several months in advance, so Stefan wasn’t a very well-liked character around the time his departure was filmed. Back when Tyler Christopher played Stefan, DOOL fans will recall how he violated Abigail DiMera (Kate Mansi) while she had DID.

Abigail wasn’t in her right mind at the time and was in no condition to offer Stefan consent. Plus, Stefan’s obsession with “Gabby,” Abigail’s wig-wearing alter, made him look completely insane. Nothing about Stefan was very likable back then, so plenty of viewers turned against him. To Days, it looked like there was no hope for the character’s future. Some fans were begging for Stefan to be killed off.

Of course, that’s where the show’s tape-to-air schedule hurt them. Once Barash took over, he quickly won fans over with his boyish charm and sizzling chemistry with Camila Banus (Gabi DiMera). The “Stabi” pairing took off, and Stefan’s days of chasing after “Gabby” were forgotten. Barash’s fresh spin on the role allowed for a nice Stefan reboot, so his popularity skyrocketed.

Alas, it was too late for Days of Our Lives to undo their mistake. Stefan’s horrific exit had already been filmed by the time Barash’s appeal was on full display. Fortunately, DOOL still has a chance to make things right – and it looks like they already have. In an Instagram Q&A, Barash basically let Days viewers know he’s headed back to the show. It’s already been buzzed about, but this serves as a more solid hint.

Someone asked Barash to talk about his Days status, which he couldn’t quite do. Barash wasn’t allowed to come right out and say anything. However, Barash was able to get his point across in a roundabout way. “That’s kind of a murky area right now,” Barash said. “But I think we all know. I think it’s been confirmed by a lot of websites what’s going on.”

Barash grinned a bit for this next part. “But that’s what the websites say, so I cannot confirm or deny at this moment,” Barash teased. It certainly sounds like Barash is back on set, which further supports the previous proof. A man resembling Barash popped up in a day player’s Instagram story, which was later deleted. A suspicious move! Banus also liked a tweet about Barash already being back, so these are all good signs.

It’ll be a while before Stefan or Barash’s new character potentially makes it back on screen, but let’s hope more Days of Our Lives spoilers will surface soon. Still, it was nice of Barash to provide some status updates. We’ll keep you posted as other Days news comes in. Stay tuned to DOOL and don’t forget to check CDL often for the latest Days of Our Lives spoilers, updates and news.