Days of Our Lives Spoilers: Brandon Barash’s Powerful Message to Women – DOOL Dad Stands Up for His Little Girl 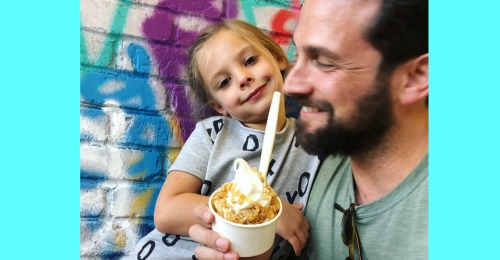 Days of Our Lives (DOOL) spoilers reveal that one DOOL dad is standing up for his daughter’s sake. Ever since Brandon Barash took over the role of Stefan DiMera, many Days fans have loved his portrayal. Stefan can be soft and caring, but he has a fierce side. He balances out the sweet and the spicy.

It seems Barash is that way in real life as well – at least when it comes to issues that affect his little girl, Harper Rose! He adores his daughter, so he’ll always fight for her future. Barash shares Harper with Kristen Storms (General Hospital’s Maxie Jones) and happens to be a GH alum himself (ex-Johnny Zacchara). He knows all about the makeup that comes with soap territory, but this case is a bit different.

In response to Kim Kardashian West’s new body makeup line, Barash posted an outraged tweet. “As a father, raising his little girl to be a confident, compassionate, and self-assured young woman…this saddens me,” Barash said. “You’re LITERALLY telling girls not to feel comfortable in their own skin. That they should now be walking around in body makeup? Get outta here.”

Barash received plenty of support from Days viewers and his old GH fans as well. One Twitter user said“…I feel awful for how insecure young women will be. We all have what we perceive as flaws but years go by and we hopefully realize how silly that is. Beautiful on the inside radiates on the outside. “Totally agree with you,” another fan insisted. “Girls should feel comfortable in their skin.”

Barash’s Days of Our Lives costar weighed in on this issue, too. Linsey Godfrey (Sarah Horton) wants better world for her daughter, Aleda, so she’s glad dads like Barash are fighting the good fight. She insisted she loves Barash for “speaking out as well especially as a father of an amazing little girl!”

Barash replied, “Oh I’m sure I am, too. Keep speaking up — our little girls need it!” Godfrey has another grateful response about being allies and suggested their daughters are friends. It’s nice to see them promoting such positive things. We could all use more love and light.

As for what’s next in Salem, Days of Our Lives spoilers say Stefan will keep falling harder for Gabi Hernandez (Camila Banus). Meanwhile, Sarah will settle for Rex Brady (Kyle Lowder) – at least for as long as she can! We’ll give you updates as other news comes in. Stay tuned to DOOL and don’t forget to check CDL often for the latest Days of Our Lives spoilers, updates and news.

As a father, raising his little girl to be a confident, compassionate, and self-assured young woman…this saddens me. You’re LITERALLY telling girls not to feel comfortable in their own skin. That they should now be walking around in body makeup? Get outta here. https://t.co/u85n7w6DKt