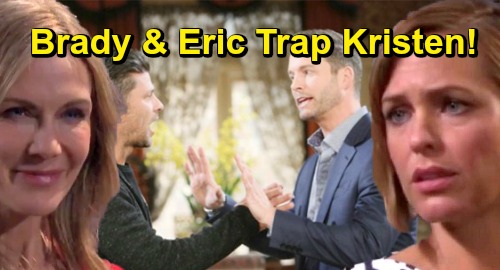 Days of Our Lives (DOOL) spoilers tease that Kristen DiMera (Stacy Haiduk) picked the wrong allies! She already ran into trouble with Ted Laurent (Gilles Marini), who tried to tell “Nicole Walker” (Arianne Zucker) her daughter was still alive. Kristen couldn’t have that shocker getting out, so she ordered Xander Cook (Paul Telfer) to kill Ted. The trouble is Xander’s gone soft, too!

Xander admitted that Sarah Horton (Linsey Godfrey) is the first woman who’s made him want to be a better man. He’s decided to let Ted live for now and other shifts in his villainous behavior could follow. Xander’s never going to be the perfect angel, but he does seem to be turning from his devious ways a bit.

Unfortunately, Xander can’t reveal what he’s done without losing any shot he might have with Sarah. That should be enough to keep Xander quiet for a while. With that in mind, we have to consider which characters might catch on first. On July 3, Days spoilers say Eric Brady (Greg Vaughan) will make a startling discovery. There’s no guarantee that involves “Nicole Walker” (Arianne Zucker), but it certainly could.

Will Eric stumble across a clue about Kristen? Days of Our Lives spoilers suggest it’ll be a while before Eric fully understands, but he deserves a hint or two! Later, Brady Black (Eric Martsolf) will battle concerns. After Kate Roberts (Lauren Koslow) goes missing, Brady will guess Xander had something to do with it. He should be even more convinced once he trades info with Rex Brady (Kyle Lowder).

Days of Our Lives spoilers say Rex is headed out of Salem sooner or later, so he may not stay involved. Perhaps he’ll just be a useful tool to get Brady on the right track. After all, it makes sense for Brady and Eric to be the main characters on the case. They’re the ones with the deep connection to Nicole – and a connection to Kristen. Maybe Eric and Brady will team up to solve this mystery.

If they become certain “Nicole” isn’t who she says she is, it shouldn’t take them long to figure out Kristen’s behind it. Maggie Kiriakis (Suzanne Rogers) claimed she saw Kristen in “Nicole’s” room. Kate insisted “Nicole” was far too chummy with Xander. When “Nicole” faced Sami Brady’s (Alison Sweeney) suspicions, she tried to play off the edge of her mask as a scar.

These DOOL puzzle pieces are waiting for Brady and Eric to put together. They just need a few more to complete the picture. Once they realize Kristen’s responsible, will they set a trap? That might bring better results than just confronting Kristen. Eric and Brady will definitely want to figure out how much Kristen knows about where the real Nicole might be.

It sounds like these brothers could be on a sneaky mission down the road! We’ll give you updates as other Days news comes in. Stay tuned to DOOL and don’t forget to check CDL often for the latest Days of Our Lives spoilers, updates and news.