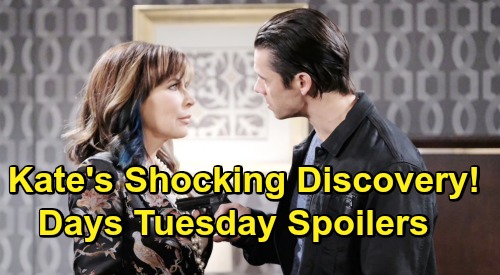 Days of Our Lives (DOOL) spoilers for Tuesday, June 25, tease that Rex Brady (Kyle Lowder) and Sarah Horton’s (Linsey Godfrey) wedding will begin. Rex seems oblivious to Sarah and Eric Brady’s (Greg Vaughan) intense feelings, so he’s pushing for these nuptials immediately. To be fair, Nicole Walker (Arianne Zucker) would still be Eric’s first choice if she was a possibility.

Even though Eric has given up hope, he’s still in love with his former flame. Deep down, Sarah knows Eric and Nicole belong together, so she’ll marry Rex as planned and hope Nicole comes around eventually. Days of Our Lives spoilers say Eric will officiate their quick ceremony in the hospital chapel, so they’ll soon be pronounced husband and wife.

Once Sarah is officially Mrs. Rex Brady, she’ll decide to put Eric behind her and focus on her new hubby. Sarah will resolve to help Eric win Nicole back, but that plan won’t work out since Kristen DiMera’s (Stacy Haiduk) playing the part! Meanwhile, Kate Roberts (Lauren Koslow) will grill “Nicole” about her secret. She’s certain “Nicole” has one, so she’ll do some needling in Tuesday’s DOOL episode.

Of course, Kristen won’t spend much time putting up with this. “Nicole” will kick Kate out of her room, but Kate will still uncover something surprising later. Days spoilers state that she’ll eavesdrop on a conversation, which will let her know Xander Cook (Paul Telfer) has committed more crimes. Her shocking discovery might have something to do with Ted Laurent (Gilles Marini) being held hostage.

Other Days of Our Lives spoilers say Eve Deveraux (Kassie DePaiva) will have an offer to make. She’ll get tired of waiting around on Ted, so she’ll turn to Justin Kiriakis (Wally Kurth) and suggest that he should be the new DA. Eve would probably rather have someone more willing to bend the rules, but she knows Justin is a good attorney and a dependable guy. He’s clearly her best option right now.

Elsewhere, Jennifer Horton (Melissa Reeves) will talk to Jack Deveraux (Matthew Ashford) about his memories. She’ll bring up Dr. Wilhelm Rolf’s (William Utay) diary and insist that Jack can use the serum to recover what he’s lost. If Jack mentions Will Horton’s (Chandler Massey) brain tumor, Jenn will have an answer for that, too. Rex and Sarah developed the antidote, so that greatly lowers the risks to Jack.

Jack won’t give Jennifer a firm “yes” yet, but that’s coming eventually! We’ll give you updates as other Days news emerges. Stay tuned to DOOL and don’t forget to check CDL often for the latest Days of Our Lives spoilers, updates and news.