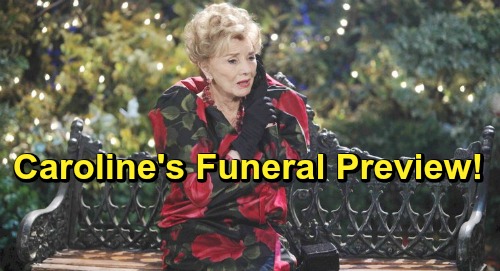 Days of Our Lives (DOOL) spoilers tease that Caroline Brady’s (Peggy McCay) funeral is coming up. It’ll be a somber occasion, but there’ll be some fun surprises thrown in. This will be a time for DOOL to remember the character of Caroline and her beloved portrayer.

In a recent issue of Soap Opera Digest, Head Writer Ron Carlivati offered a preview of what Days fans can expect. He also talked about how the memorial episodes came together. Carlivati noted that due to the show’s filming schedule, they couldn’t address McCay’s passing until several months later. However, they knew they indeed wanted to address it.

Caroline was an important character and McCay deserved to be recognized for her time at Days. Carlivati and his writing team realized that, so they got to work soon after the news of McCay’s death broke. After mulling it over, they decided having Caroline pass away as well made the most sense. This allowed them to do a tribute to both Caroline and McCay as part of their sendoff.

“While sad, it’s a very heartwarming family story of people gathering to say good-bye and honor both the actress and the character,” Carlivati said. “But we also wanted it to somehow impact a current storyline, so we came up with a couple ways that the arrival of certain family members would also affect the story on canvas. One of our big stories is significantly affected by Caroline’s death.”

In other words, Days of Our Lives spoilers say the show will weave drama into this tribute, and that’s great to hear. Although memorial episodes are wanted and needed, they often bring the action to a standstill on soaps. Thanks to Carlivati’s reassurance, we know that won’t be the case here. The comebacks will shake things up in the midst of the mourning.

Speaking of those comebacks, we should point out that Carrie Reed (Christie Clark) will be one of them. She’ll share a secret with someone that’s sure to cause some drama. Sami Brady (Alison Sweeney) and Lucas Horton (Bryan Dattilo) will be mainly be around for dying Will Horton (Chandler Massey), but they’ll certainly attend the funeral gathering as well.

Shawn Brady (Brandon Beemer) and Belle Black (Martha Madison) will also be returning, but we’d say they’ll have another huge reason to come home, too. Days of Our Lives spoilers say Claire Brady (Olivia Rose Keegan) is about to spiral out of control, so she’ll definitely need her parents.

It sounds like there’ll be plenty of chaos surrounding Caroline’s funeral this summer. We’ll give you updates as other Days details emerge. Stay tuned to DOOL and don’t forget to check CDL often for the latest Days of Our Lives spoilers, updates and news.