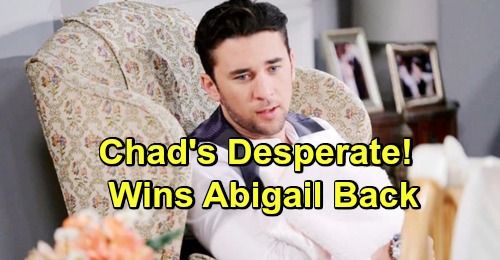 Days of Our Lives (DOOL) spoilers tease that Chad DiMera (Billy Flynn) will be desperate for a plan. Abigail Deveraux (Kate Mansi) clearly isn’t pleased with Chad at the moment. He refused to believe her when she swore she was sane, which never made much sense.

When Abigail’s alters were actually around, she sought help in the confusion. Abigail was fragile and weary, so she was eager to find a solution. Chad also talked to Abigail’s alters himself, which left him with no doubt. It could be proven that Abigail’s alternate personalities were causing destruction.

This time Abigail knew she was fine, but Chad refused to believe it. He just took Kate Roberts (Lauren Koslow) and Gabi Hernanez (Camila Banus) at their word. Chad even traded little Charlotte DiMera to make sure Abigail got locked away at Bayview. That was really the last straw!

Obviously, Chad’s got a big hole to climb out of. He’ll hope to be a family with Abigail and their children, but forgiveness won’t be easy to get. Days spoilers say Chad will be disheartened after Abigail lashes out again. He’ll worry that he won’t be able to repair the damage, but he won’t give up.

DOOL fans can expect Chad to do some brainstorming. After getting advice from Jennifer Horton (Melissa Reeves) and Julie Williams (Susan Seaforth-Hayes), Chad will be more determined than ever to win Abigail back. Of course, he’ll know he needs a grand gesture or two. This isn’t the kind of situation where you can just send some flowers and call it even.

Days of Our Lives spoilers say Chad will take the first step toward his reunion goal next week. On January 11, Chad will pull off a big surprise. He’ll set up a fun family dinner and hope that it puts a smile on Abigail’s face.

Charlotte and Thomas DiMera (Asher Morrissette) should be there, but Chad may also invite Jennifer, JJ Devereaux (Casey Moss) and even Jack Deveraux (Matthew Ashford). Jack may not remember his fam right now, but they still love him. Abigail would undoubtedly like to spend some quality time with her dad, so this special dinner may touch her heart.

However, it’s going to take more than one night to fix things. There’s no guarantee this evening will be the heartwarming gathering Chad’s counting on. It could just as easily be awkward and tough to endure. Regardless, Chad will have to work harder if he wants to get out of the doghouse!

The new year starts with a shock: Jack is back, but he doesn’t remember anyone in Salem. Watch #DAYS, weekdays on NBC. pic.twitter.com/EcXbFQ4V8R