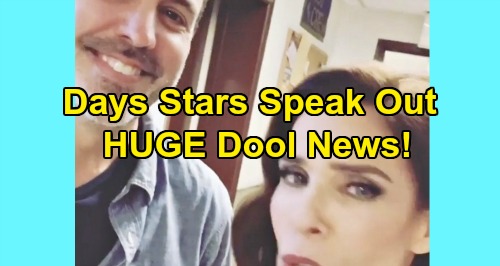 Days of Our Lives (DOOL) spoilers has some news regarding the recent cancellation rumors that have been swirling about the show. As you might have heard, DOOL will soon be going on hiatus from a production standpoint. This, along with a recent TV Line report stating that all DOOL cast members have been released from their contracts for the duration of the hiatus, has led to some rumors that DOOL has been canceled.

Earlier today, a popular Days of Our Lives cast member took to Twitter to address the rumor and the fears. Chandler Massey, who portrays Will Horton on the NBC soap, addressed the issue directly on his feed.

Chandler said this: “We’re not being canceled. We are pausing production because we are so far ahead of schedule (and it saves us $). Days will still air during the entire hiatus, so you won’t miss anything!”

What Chandler is referring to is the fact that DOOL has historically been filmed about 5 months in advance. So, for the show to pause production will allow them to shorten the gap between filming and when filmed episodes air.

A bit later, Kristian Alfonso, who portrays Hope Brady and Princess Gina Von Amberg, posted a short video on Instagram from the hair and make-up area at DOOL. She was joined with DOOL head writer Ron Carlivati on the video, and they addressed the recent cancellation reports.

At that point, Ron chimed in with, “You heard it here first, folks.” Kristian then concluded by saying, “Don’t listen to the news always, especially that report. Bye. See you on set.”

That’s bound to be relieving news for DOOL fans, and we’re happy to pass along the words of those closest to the show to allay any fears about the show’s future. Of course, no one knows what will happen with the show down the line, but that’s true of any televised drama.

What’s your take? Are you glad to have heard from some of the people behind the scenes at DOOL? Stay tuned to DOOL and don’t forget to check CDL often for the latest Days of Our Lives spoilers, updates, and news.

We’re not being cancelled. We are pausing production because we are so far ahead of schedule (and it saves us $). Days will still air during the entire hiatus, so you won’t miss anything!