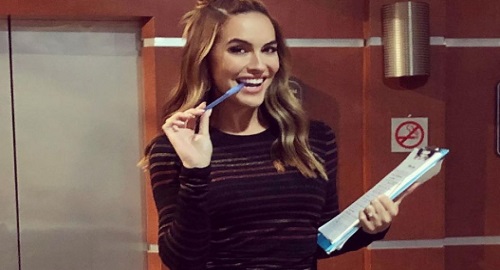 Days of Our Lives (DOOL) spoilers reveal that one NBC soap actress is speaking out against fans who struggle to separate fiction from reality. We all have fun watching Days and even ranting about characters’ behavior when it’s appropriate. Sometimes certain Salemites deserve a good berating and that’s fine.

However, there’s no need to go after actors for what their characters do. They’re just showing up to work and doing their jobs. It’s important to know the difference between reel and real! DOOL’s Chrishell Hartley (Jordan Ridgeway) was recently harassed by a viewer who blamed her for Jordan’s actions. This viewer even brought Hartley’s family into it, so all of this is just uncalled for.

On Twitter, Hartley shared the news with her fans through a couple screenshots. This person suggested someone should take Hartley’s stepdaughter away from her and see how she feels about that. In another tweet, Hartley was told she needed serious help.

Obviously, this is ridiculous since Hartley is just playing a part. She’s an actress who shows up at the studio, not Ben Weston’s (Robert Scott Wilson) still mentally unstable sister. “Someone is a little too into their stories,” Hartley said. “I apologize that Jordan doesn’t want Ben around her son. But you do understand I am just acting as a character right..? Lol”

Some Days of Our Lives fans just can’t seem to wrap their heads around that, so it’s good that Hartley’s calling it out and will hopefully raise some awareness. Her costar Linsey Godfrey (Sarah Horton) chimed in with a reply on the topic. “Good gravy! People need to get a grip,” Godfrey said. Brandon Barash (Stefan DiMera) was seemingly in shock over how wild this was since he simply said, “Oh my.”

Days of Our Lives spoilers say Jordan’s behavior is only going to get worse, so let’s hope people can remember it’s just a soap! There’s no need to send hateful messages over what’s happening on screen. On the bright side, Hartley’s playing the role well and has some exciting scenes coming up, so stay tuned. We’ll give you updates as other Days details emerge. Stick with DOOL and don’t forget to check CDL often for the latest Days of Our Lives spoilers, updates and news.

Someone is a little too into their stories 🤦🏻‍♀️😳 I apologize that Jordan doesn’t want Ben around her son. But you do understand I am just acting as a character right..? Lol 🤷🏻‍♀️ #DAYS ⌛️ pic.twitter.com/NpeTQXz4O9