BY hellodrdavis on March 18, 2019 | Comments: one comment
Related : Days of Our Lives, Soap Opera, Spoiler, Television 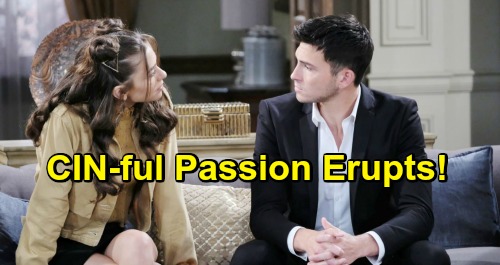 Days of Our Lives (DOOL) spoilers tease that Ciara Brady (Victoria Konefal) and Ben Weston (Robert Scott Wilson) will soon face a scary situation. Ciara’s been terribly upset that Ben broke things off with her, and she’s been trying to come to terms with the situation. Of course, it hasn’t helped that Ben went back to work for Stefan DiMera (Tyler Christopher), but that won’t keep Ciara from trying to get Ben back.

It looks like Ciara will quickly figure out that going back to work for Stefan is all part of Ben’s plan to drive her away, and she’ll want to confront him and let him know that she won’t go away quietly. Days of Our Lives spoilers say that Ciara will turn up at the DiMera mansion to track Ben down and to try to talk some sense into him.

But while she’s there, an assassin will be waiting in the wings, looking to take out Chloe Lane (Nadia Bjorlin). Chloe has been staying at the DiMera mansion for her own safety, but it seems that an assassin will make it onto the property and mistake Ciara for Chloe. But fortunately, Ben will save Ciara from terrifying situation.

According to Days of Our Lives spoilers, the event will have different effects on Ben and Ciara. It seems that Ciara will think that the whole experience shows that Ben will always protect her, rather than being a threat to her safety. But Ben will think that Ciara never would have been in danger in the first place had she not been with him at the mansion.

Despite their difference of opinion about the shooting and what it means for them, it doesn’t look like Ben is going to have much success getting Ciara to leave him alone. Ciara will be determined to convince Ben that the two of them belong together, and she’ll stay in Ben’s orbit for the foreseeable future.

In fact, it sees that Ciara will try to show Ben that they belong together, and things will heat up a bit between them in the near future. Days of Our Lives spoilers indicate that the two will share a sexy moment together, and that passion will start to erupt between them. Of course, Ben and Ciara haven’t yet made love, so there’s going to be a considerable amount of sexual tension between them.

Their intense moment will come during a time when Ciara is taking care of Ben. Could Ben have ended up being hurt by the bullet that was meant for Ciara at the DiMera mansion? Or will Ciara be taking care of Ben for another reason? Whatever the case, it will bring the couple together and passion will take over, which is good news for “Cin” fans!

Are you looking forward to some passionate moments between Ben and Ciara? Stay tuned to DOOL and don’t forget to check CDL often for the latest Days of Our Lives spoilers, updates, and news.