Days of Our Lives Spoilers: Rafe’s Revenge On Ted – Ruins DA’s Career and Drive Him Away From Hope

BY hellodrdavis on March 18, 2019 | Comments: one comment
Related : Days of Our Lives, Soap Opera, Spoiler, Television 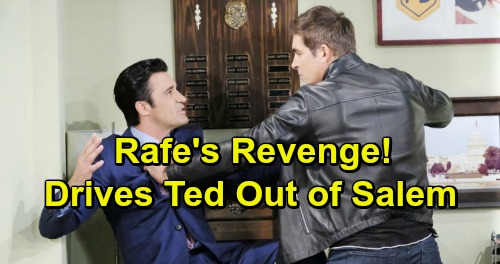 Days of Our Lives (DOOL) spoilers tease that Rafe Hernandez (Galen Gering) isn’t going to let up on smarmy Ted Laurent (Gilles Marini) anytime soon. Rafe has long suspected that Ted is after his wife Hope Hernandez (Kristian Alfonso), and Ted has basically admitted that he is. Ted is always hanging around Hope in Rafe’s absence, and recently he even planted a kiss on Hope.

But Rafe hasn’t had much success in getting Ted away from Hope. Thus far, Rafe’s main strategy has been to appeal to Hope, to get her to see that Ted is an opportunist and is blatantly trying to sabotage their marriage. But Hope won’t willingly separate herself from Ted and keeps maintaining that there’s nothing going on between them.

Clearly, Rafe needs a new strategy to eliminate the “Ted threat” to his marriage. Appealing to Hope has gotten him nowhere, and in the meantime, Ted has done more to insinuate himself in Hope’s life. After all, his decision to take the Interim DA position was based solely on his desire to work closely with Hope.

According to Days of Our Lives spoilers, Rafe will decide that he’s had enough of Ted’s nonsense and he’ll take a couple of different tactics. First off, Rafe will decide to strengthen his relationship with Hope, rather than spend time harping on her about Ted. Rafe will plan a special anniversary dinner for himself and Hope, and the two of them will renew their love for each other during their special Ted-free evening.

But Rafe won’t stop there. It looks like his next plan of attack will be to go after Ted’s job. Days of Our Lives spoilers say that Rafe will soon get Ted into trouble with his boss, mayor Abe Carver (James Reynolds). Perhaps Ted will do something unethical or even illegal in his capacity as Interim DA, which wouldn’t be too surprising, knowing Ted.

Of course, we know that Gilles Marini is no longer filming at DOOL, so at some point in the coming months we’ll see the last of Ted. But will he leave Salem due to Rafe’s influence, and will he leave without causing serious havoc to Rafe and Hope’s marriage? So far, Hope has resisted Ted’s advances, including the instance when he kissed her, but it looks like he might be getting to Hope.

According to Days of Our Lives spoilers, Hope will soon confide in her bestie Jennifer Horton (Melissa Reeves) about Ted, so it could be that Hope is starting to develop feelings for Ted, which would be a huge impediment in Rope’s marriage. And soon Hope and Ted will share a warm moment together, further indicating that Hope may be warming up to Ted.

Do you think Rafe will be successful as he ramps up his efforts to go after Ted? Stay tuned to DOOL and don’t forget to check CDL often for the latest Days of Our Lives spoilers, updates, and news.