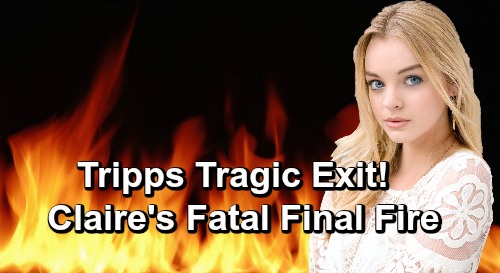 Days of Our Lives (DOOL) spoilers tease that Ciara Brady (Victoria Konefal) will stick to the plan. Ben Weston (Robert Scott Wilson) suggested that the only way to take Claire Brady (Olivia Rose Keegan) down was to play along. Unfortunately, this scheme could spell disaster for another DOOL character.

During the week of June 17-21, Ciara will drop a bomb on Tripp Dalton (Lucas Adams). He’ll find out that Claire set the cabin fire that nearly killed Ciara as well as the latest one on Smith Island. Tripp will reel over the news that Claire’s an attempted murderer. He could’ve died along with Haley Chen (Thia Megia). The fact that Claire was willing to make Ciara her deadly target will be appalling, too.

However, Claire’s not done yet. That’s because Tripp and Ciara will resort to some sneaky moves. Days spoilers say they’ll pretend to buy what Eve Deveraux’s (Kassie DePaiva) selling. They’ll talk about Ben’s guilt in front of Claire and make sure she believes they’re convinced.

Tripp will also feign forgiveness at some point. He may even apologize to Claire and ask if she can forgive him! If they’re going to set Claire up for a fall, they’ve got to build her up first. Tripp will do whatever he can to dupe Claire, which honestly won’t be that hard. Claire will just be ecstatic to have another chance with the man she wants.

Once that chance is suddenly ripped away, Claire will be furious. Days of Our Lives spoilers say Tripp will dump Claire all over again. He could blame it on his connection with Ciara if he really wants to push Claire’s buttons.

Alas, this scheme will take a wrong turn. Ciara just wanted to prove Claire’s involvement in the fires, but that proof will come at a steep price. After Claire comes unhinged, she’ll undoubtedly plot another murder attempt. Claire told Eve that if she couldn’t have Tripp, she didn’t want anyone else to have him either.

Days of Our Lives spoilers point to deadly danger for Tripp. Will he get caught in another fire? Will he suffer terrible burns or even lose his life? Either way, we know Tripp is set to exit the show soon. His outcome will be grim, so this could be what finally breaks Claire and makes her see that she needs help. A prison or mental institution stint is likely in Claire’s future.

Ciara should have some regrets about how she handled all this as well. Tripp’s awful ordeal will bring plenty of DOOL drama and set up his exit along with Claire’s. We’ll give you updates as other Days details emerge. Stay tuned to the NBC soap and don’t forget to check CDL often for the latest Days of Our Lives spoilers, updates and news.