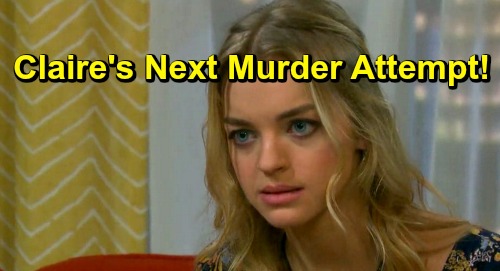 Days of Our Lives (DOOL) spoilers tease that Claire Brady (Olivia Rose Keegan) is headed down a dangerous path. She went to the cabin to save Ciara Brady (Victoria Konefal), but she ended up trying to kill her instead. Claire soon changed her mind and returned, but help had already arrived. It was all just a case of making a horrible decision and ultimately regretting it.

However, Claire has seemed different since the fire-starter revelation. It’s clear that Tripp Dalton (Lucas Adams) has become a real obsession for her. Claire is slowly coming unhinged and that can’t be good news for the people of Salem! Claire tried to burn Ciara in the blaze, so she’s an attempted murderer. To make matters worse, Ciara probably won’t be the last victim Claire targets.

Days of Our Lives spoilers say Claire will have threats coming from every angle. During the week of April 1-5, JJ Deveraux (Casey Moss) will grill Claire about the lighter. It appears he’ll stumble across it somehow and suspect that Claire might’ve started the fire. The jig won’t be up for Claire just yet, but JJ will be watching her closely. His life could certainly be in jeopardy if he gets too close to the truth.

Of course, Haley could land on Claire’s hit list as well. It’s obvious that Haley won’t be deported, so that means Haley will either marry Tripp or there’ll be some other legal loophole. Either option leaves the door open for new Days love to bloom, especially if Tripp learns Claire’s been scheming against Haley.

Claire might set up an “accident” for Haley. Whether she’s still trying to lock down Tripp or out revenge because she’s lost him, Claire could easily go after her DOOL rival. Days of Our Lives spoilers say Haley might never see it coming! Naturally, there could be other threats that pop up along the way – like Ciara, the victim who started it all.

If Claire tries to murder Ciara again to keep her secret, it might be a fitting end to this story. It’d bring everything full circle and potentially send Claire to prison or the looney bin. The cops and mental health professionals could decide where she belongs!

It sounds like Claire’s storyline will come with some crazy twists and turns. Who do you think her next attempted murder victim will be? We’ll give you updates as other Days details emerge. Stay tuned to DOOL and don’t forget to check CDL often for the latest Days of Our Lives spoilers, updates and news.