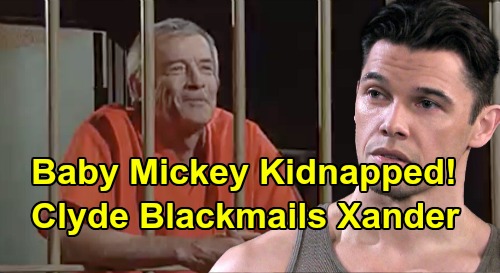 Days of Our Lives (DOOL) spoilers tease that Ben Weston (Robert Scott Wilson) will have a chat with his father. DOOL fans know Ben and Clyde Weston (James Read) have a complicated relationship. Clyde was a rotten, abusive dad to Ben when he was growing up. They’ve had some mild success reconnecting over the years, but Clyde consistently does the wrong thing to “help” his son!

Clyde will decide Xander just needs a little help to do what’s right. Days spoilers say Clyde will make a horrifying confession during the week of November 18-22. He’s got minions on the outside, so he’ll reveal that he had one of them kidnap Sarah Horton’s (Linsey Godfrey) baby. Meanwhile, Sarah will freak when little Mackenzie “Mickey” Horton suddenly goes missing!

Clyde’s goal will be to pry an admission of guilt out of Xander. He’ll assume Xander will confess to reunite Sarah with Mickey – and he’ll be exactly right. Once Xander’s brought up to speed on Clyde’s demands, he’ll march down to the police station. Days of Our Lives spoilers say Xander will be ready to make a full (and most likely bogus) confession.

Ben obviously won’t be on board with Clyde’s plan at all. He won’t want an innocent baby dragged into his dad’s mess, but it’ll be too late to protest. Clyde’s plot will already be well underway. To make matters worse, Clyde will get a bit greedy. Instead of returning the baby as promised, he’ll hope to use Mickey to his advantage, too. Clyde will hope he can negotiate his way out of prison.