Days of Our Lives Spoilers: Clyde’s Ruthless Murder Attempt on Will – Ben to the Rescue, Saves Cellmate’s Life 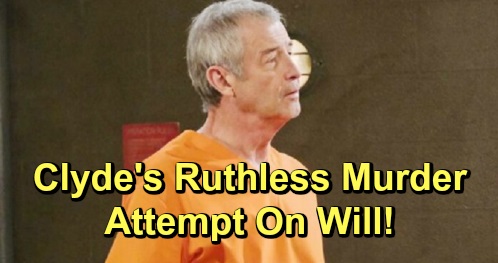 Days of Our Lives (DOOL) spoilers tease that Will Horton (Chandler Massey) will find himself in grave danger. During the week of December 2-6, Clyde Weston (James Read) will decide Will’s on his bad side. He’ll resolve to make Will pay the price, but Ben Weston (Robert Scott Wilson) won’t stand for that. Once Ben realizes Will’s life is at stake, he’ll leap into action and try to prevent this vicious attack.

Of course, it’s interesting that Days of Our Lives spoilers use the word “try.” Whenever we see that word, it often means a character isn’t quite successful. There’s a difference between saying “Ben prevents Clyde’s attack” and “Ben tries to prevent Clyde’s attack.” It could mean that Will’s still injured slightly, but we do know Ben will stop Clyde from killing Will. That’s the important thing!

Ben thought he killed Will after his terrible reign as the necktie killer. Thanks to Clyde’s info, Ben learned that wasn’t the case. Will ultimately came back from the “dead,” but Ben still feels guilty about his actions. He cost Will so much time with his loved ones, so this is Ben’s opportunity to make things right. You might say Ben will cancel out his previous murder attempt by preventing Clyde’s.

DOOL viewers know Will recently decided he believes Ben. He initially doubted Ben’s claims that he was innocent in Jordan Ridgeway’s (Chrishell Hartley) murder, but he’s on his side now. Once Ben saves him from Clyde’s deadly plot, Will will have another reason to believe in his cellmate. They should become strong allies, which works out well since their storylines could be connected through Ciara Brady’s (Victoria Konefal) mission.

Days fans will recall that Clyde sent anonymous texts during the kidnapping crisis. He pointed out that Xander Kiriakis (Paul Telfer) and Victor Kiriakis (John Aniston) had an innocent man locked up. That news rang true for Xander, who went against Victor’s advice and wrote out his confession.

Ben is indeed innocent, but he doesn’t seem to be the one Xander and Victor were thinking of. There was no other reason to keep things so vague. The fact that Ciara and Ben still haven’t confirmed their suspicions is a huge red flag. If Victor and Xander were really to blame for ordering Jordan’s death, we’d know for sure by now.

Instead, Days of Our Lives is keeping the mystery open and setting up a twist. Ciara will likely learn Will is innocent in Adrienne’s death after all. It can serve as one more way to bond Will and Ben down the road.