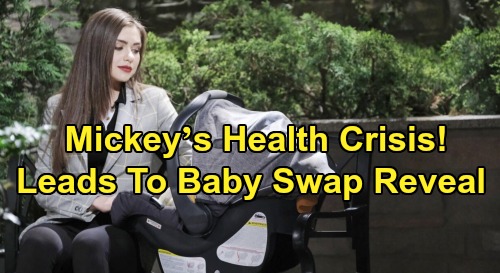 Days of Our Lives (DOOL) spoilers tease that things are really heating up on the baby front. As DOOL viewers know, Eric Brady (Greg Vaughan) has just found out that he’s the father of Sarah Horton’s (Linsey Godfrey) baby, Mackenzie “Mickey” Horton. That’s about to lead to some major drama since Sarah and Xander Kiriakis (Paul Telfer) led everyone to believe that Xander was Mickey’s father.

Of course, Eric and Xander can’t stand each other, and it looks like Eric is about to demand that Xander stay away from his daughter…or else. Xander has come to love Mickey, so separating from the little girl is going to be incredibly difficult for him, and we’ll surely see some major clashes between Eric and Xander along the way, with Sarah in the middle.

The good news here is that we’ll get to see some touching scenes between Eric and Mickey. It should be an emotional reunion, and Eric will soon take Mickey to visit with Marlena Evans (Deidre Hall) and John Black (Drake Hogestyn). But soon, some more drama will ensue when Marlena notices that Mickey has developed a fever. Now, a slight fever could be nothing to worry about, but it could also signify some serious problems.

Could we be looking at a health crisis for Mickey? If so, it’s bound to serve a critical storyline purpose, and it could have to do with Xander’s big confession – the one that he burned in the Kiriakis fireplace. DOOL viewers will remember that Clyde Weston (James Read) arranged to have Mickey kidnapped so that Xander would confess to setting up Ben Weston (Robert Scott Wilson) for murder.

However, DOOL buzz suggests that Xander might have been confessing to a very different crime, and that it could involve Mickey. DOOL viewers will remember that Kristen DiMera (Stacy Haiduk) and Brady Black’s (Eric Martsolf) baby died under circumstances that haven’t yet been revealed to viewers. What if the crime that Xander and Victor Kiriakis (John Aniston) conspired to wasn’t framing Ben, but was switching babies after Sarah’s baby died?

If that’s the case, then it would mean that Mickey was in fact Kristen and Brady’s baby, which would be a huge development on the show. And it’s also the sort of thing that a major health crisis for Mickey could reveal. Perhaps Xander and Victor switched babies after Mickey died in order to (a) save Sarah the pain of losing her baby, and (b) get Kristen out of their lives for good.

We’ll see what happens, but it seems like the baby storyline has a lot of life left, and a switched baby twist seems like something DOOL would do. Do you think that Sarah’s baby could really belong to Kristen and Brady? Stay tuned to DOOL and don’t forget to check CDL often for the latest Days of Our Lives spoilers, updates, and news.