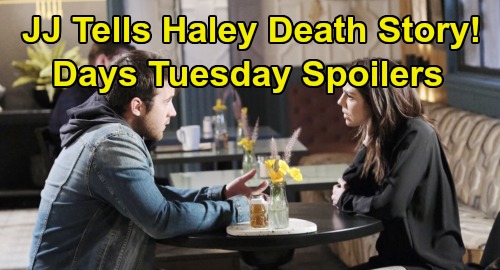 Days of Our Lives (DOOL) spoilers for Tuesday, November 26, tease that Lani Price (Sal Stowers) will finally open up to Kristen DiMera (Stacy Haiduk). She’s been keeping a tight lid on why her relationship with Eli Grant (Lamon Archey) blew up, but Kristen will convince her to confess. At the convent, Lani will admit Gabi Hernandez (Camila Banus) threatened Julie Williams’ (Susan Seaforth Hayes) life and forced her to dump Eli at the altar.

Kristen will be stunned by the wild pacemaker story and the impossible situation Lani was in. She doesn’t have any hope for her own future with Brady Black (Eric Martsolf), but she’ll think Lani can still find her bliss with Eli. Kristen will encourage Lani to head back to Salem and expose Gabi’s plot. She’ll feel certain Eli will take Lani back if he understands what she was up against.

However, Lani will insist Gabi could still try to kill Julie. She won’t feel comfortable risking Julie’s life, but Kristen will think it’s a mistake to let Gabi get away with this. In the meantime, Xander Kiriakis (Paul Telfer) will declare his love for Sarah Horton (Linsey Godfrey) and get quite a shock moments later. Sarah just praised Xander for stepping up as a dad, but she doesn’t know Nicole Walker’s (Arianne Zucker) been blabbing to Eric across town.

Days of Our Lives spoilers say Eric will show up in a rage soon. He’ll want to see his daughter and won’t appreciate all the daddy deception. Eric will insist on taking his rightful place in Mickey’s life, but Xander will insist he’s her dad. He’ll hate the idea of being pushed out of the picture, so expect Sarah to get caught in the middle of this faceoff.

Of course, Sarah will have to answer for her own lies as well. Days spoilers say it’ll be a huge mess, but there’s a good chance a twist is brewing down the road. It seems likely Xander swapped Sarah’s dead baby for Kristen’s healthy one, so that’s another bomb that could drop eventually.

Until then, DOOL fans will get updates on struggling JJ Deveraux (Casey Moss). He’ll have a chat with his sister on Tuesday, so Abigail DiMera (Kate Mansi) will undoubtedly express some concern. JJ’s been trying to cope with Haley Chen’s (Thia Megia) death, but he’s choosing all the wrong strategies. Abigail will talk to JJ about what happened to Haley and how he’s dealing with it. She’ll hope she can give JJ some support when he needs it most.

Days of Our Lives spoilers say viewers may get a few more details about Haley’s staircase fall. JJ thinks Kristen pushed Haley, but Kristen claimed it was an accident. The whole truth may not come out yet, but it should help JJ to confide in someone anyway.

Finally, Eli will offer Gabi a warning. He’ll admit Abigail and Chad DiMera (Billy Flynn) are onto him, so he’ll have to be sneakier about how he figures out what they’re up to. Protecting Gabi will certainly be a priority, but Eli’s bound to run into more trouble along the way.

It sounds like some fantastic scenes are ahead. We’ll keep you posted as other Days news comes in. Stick with DOOL and don’t forget to check CDL often for the latest Days of Our Lives spoilers, updates and news.