BY hellodrdavis on November 25, 2019 | Comments: one comment
Related : Days of Our Lives, Soap Opera, Spoiler, Television 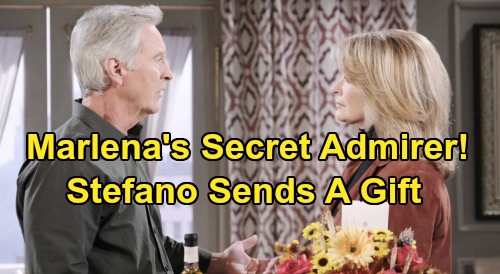 Days of Our Lives (DOOL) spoilers tease that Marlena Evans (Deidre Hall) and John Black (Drake Hogestyn) will soon have a mystery on their hands. As DOOL viewers know, these two are solid in their relationship. Many people over the years have tried to come between them, but their bond seems too strong to shake.

But now there are two people on the Salem scene who would love to drive a wedge between Marlena and John. One is Princess Gina Von Amberg (Kristian Alfonso), who has managed to finagle her way into John and Marlena’s home. She managed to get John to invite her to the penthouse while Marlena was away working overseas. Of course, neither John or Marlena know that she’s Princess Gina – they think that she’s Hope Brady (Kristian Alfonso).

But now Marlena is home from her work assignment, and it doesn’t look like she’s keen on having “Hope” stay with them much longer. All the cozying up that Princess Gina did with John seems as if it’s about to come to an end. But Princess Gina’s got a plan in mind, and it seems to have everything to do with her companion “Steffy,” whom she talks to as if he’s Stefano DiMera (last played by Joseph Mascolo).

It’s very much looking like the person she’s talking to is Stefano, whose “essence” (i.e., his memories and personality) has been implanted into someone else’s brain, much like Princess Gina’s essence was implanted into Hope’s brain by Wilhelm Rolf (William Utay). And given the timing of Stephen Nichols’ return to DOOL, it’s looking like Stefano’s essence may have been put into Steve Johnson’s (Stephen Nichols) brain.

That would explain a lot about where Steve has been and why divorced Kayla Johnson (Mary Beth Evans) by sending her papers and didn’t attend his own sister Adrienne Kiriakis’ (Judi Evans) funeral. And it would also explain an upcoming spoiler – that Marlena will get a present on Thanksgiving from an admirer. It looks like she’ll get flowers, and perhaps a note indicating that someone special to her sent them.

Of course, Princess Gina and “Stefano” would seem to have a common goal here – to break up Marlena and John, so that Princess Gina could have John while “Stefano” reclaims Marlena. Stefano has had decades-long obsession with Marlena, and now that he’s presumably back and in Steve’s body, it looks like he’s going to want to make his move.

And it doesn’t look like John and Marlena will be in the dark about where her gift originated from for long, as Days of Our Lives spoilers say that they’ll soon put two and two together and realize that the gift probably came from Stefano. Of course, they’ll have no clue about Stefano’s essence being put into Steve’s body at this point – they’ll just be concerned that Stefano is still out there somewhere, and they’ll be right!

One can only imagine the turmoil that’s going to go down when the people of Salem realize that Stefano is back, and that Steve was eradicated so that the Phoenix could rise again. Marlena will be one of many people who are stunned by the whole thing, but she’ll be the one with whom “Stefano” is obsessed, and John will now be in the position of fending off his nemesis, who is now in his best friend’s body!

Are you looking forward to seeing the new version of Stefano cause havoc for Marlena and the rest of Salem? Stay tuned to DOOL and don’t forget to check CDL often for the latest Days of Our Lives spoilers, updates, and news.