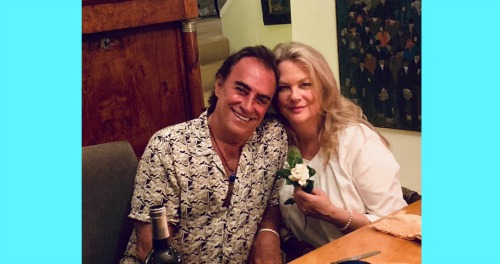 Days of Our Lives (DOOL) spoilers has some exciting news to pass on about a much-anticipated return. As DOOL viewers will remember, it was announced a while back that both Thaao Penghlis (Tony & Andre DiMera) and Leann Hunley (Anna DiMera) would be returning to the show. The news delighted fans, as it’s always great to see popular legacy characters return.

But the announcement also left viewers with a big question – which DiMera brother would Thaao be playing this time? Tony or Andre? Last time Thaao appeared on canvas, he portrayed both DiMera brothers when Tony and Andre each appeared in an out-of-body vision to Marlena Evans (Deidre Hall). This seemed to suggest that both Tony and Andre were indeed dead, since they visited Marlena from beyond the grave.

But then again, this is Days of Our Lives, where characters seemingly come back from the dead all the time, thanks largely in part to Dr. Wilhelm Rolf’s (William Utay) back-from-the-dead serum that has resulted in the re-introduction of several presumed-dead characters, including Will Horton (Chandler Massey), Jack Deveraux (Matthew Ashford), and EJ DiMera (James Scott).

DOOL fans will remember that Andre was presumed dead after being killed in self-defense by Abigail DiMera (Kate Mansi) just last year, and Tony died in 2009 after an accident on the pier. But we also saw the initials “AD” on a door in the DiMera warehouse in Nashville, indicating that someone with those initials was brought back to life by Dr. Rolf’s serum and was being rehabilitated at the warehouse.

Of course, “AD” could refer to either Andre DiMera or Antony DiMera, which is Tony’s full name. And the secret as to which DiMera brother Thaao will be portraying when he returns next is being well-guarded by TPTB. But since Thaao is active on Twitter and likes to interact with his fans, he’s offered some teaser tweets here and there.

For example, on July 11, Thaao shared a photo of himself and Leann Hunley along with the following tweet: “What a great evening we shared. Talking about what’s coming up in the World of DiMera’s later this month. I think it’s a very provocative time. Who comes through that door on the 26th & what riddles to we have to overcome?”

Then, on July 12, Thaao shared a video of a vintage DOOL scene from the 1980s of Ana and Tony. His tweet reads: “Here comes Tony & Anna, a chemistry that continues today. Oops what does that mean?”

Thaao is certainly having fun with the return and with teasing fans. And fans are responding steadily to his tweets. In response to the tweet teasing a Tony and Ana reunion, one fan responded, “CANNOT wait to see Tony & Ana back on my screen!!!!” And another replied, “You were one of my favorite couples!!”

It certainly sounds like there’s more than a good chance that Tony will be the one to return…but then again, there’s always the chance that we could see both Andre and Tony make a return, which would be a fun twist!

Which character do you think Thaao will be portraying this time around when he returns on July 26? Tony, Andre, or both? Stay tuned to DOOL and don’t forget to check CDL often for the latest Days of Our Lives spoilers, updates, and news.

What a great evening we shared. Talking about what’s coming up in the World of DiMera’s this month. I think it a very provocative time. Who comes through that door on the 26th & what riddles we have to overcome? #Days #NBC #anna #love #mystery #fear #winning #cominghome pic.twitter.com/Dhp25SbjvR