BY Heather Hughes on May 7, 2019 | Comments: one comment
Related : Days of Our Lives, Soap Opera, Spoiler, Television 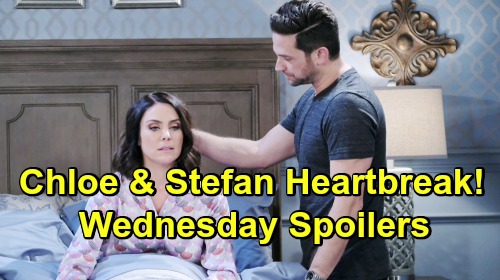 Days of Our Lives (DOOL) spoilers for Wednesday, May 8, tease that some huge fights are on the way. For starters, Rafe Hernandez (Galen Gering) will face Hope Hernandez’s (Kristian Alfonso) full wrath. Their marriage has already been on the verge of destruction, but it’s about to completely fall apart. Rafe’s seemingly fatal mistake will also bring the end of his relationship with Hope.

DOOL fans can expect Hope to rip into Rafe on Wednesday. She’ll blast him for disobeying her orders and wonder what in the world he was thinking. Rafe’s hot pursuit led to that horrific accident, so Hope will basically blame him for Holly Jonas’ (Harlow and Scarlett Mallory) death.

Days spoilers say Rafe will fire back about Ted Laurent (Gilles Marini) and all the trouble he’s caused. He’ll think Ted’s the person to hold responsible here. Next, Hope and Rafe will probably dive even deeper into their issues. They may argue about Rafe’s need to protect exes like Sami Brady (Alison Sweeney) and Jordan Ridgeway (Chrishell Hartley) before they ultimately decide their marriage is kaput.

Rafe will hurl his wedding ring off the cliff where the vehicle crashed, so he’ll definitely accept that it’s over. While “Rope” implodes, “Ericole” will face a similar situation. Days of Our Lives spoilers say Nicole Walker (Arianne Zucker) will unleash her fury. She’ll insist Holly’s death is Eric Brady’s (Greg Vaughan) fault and demand to know how he could break his promise like this.

Across town, Maggie Kiriakis (Suzanne Rogers) will lash out as well. She’s feeling unloved and abandoned by Victor Kiriakis (John Aniston), so his close moment with Kate Roberts (Lauren Koslow) will push her over the edge. Of course, Holly’s death will play a role in Maggie’s outburst as well. Days of Our Lives spoilers say Maggie will deal with a flood of emotions, but her anger will rise to the top.

Unfortunately, Victor won’t seem to think he did anything wrong. He should’ve been home supporting Maggie through this crisis, but he probably won’t see it that way. As for Kate, Victor will stand by his hiring decision. It sounds like Maggie and Victor’s marriage will take a serious hit in Wednesday’s episode.

Elsewhere, Chloe Lane (Nadia Bjorlin) and Stefan DiMera (Brandon Barash) will get some heartbreaking news. Ben Weston (Robert Scott Wilson) and Ciara Brady (Victoria Konefal) will give them updates on Holly’s demise, so that’ll certainly bring devastation. Thankfully, Holly is fine and headed to her new home according to Xander Cook (Paul Telfer). His deception will cause plenty of chaos!

Some exciting scenes are coming up on the NBC soap. We’ll keep you posted as other Days details emerge. Stay tuned to DOOL and don’t forget to check CDL often for the latest Days of Our Lives spoilers, updates and news.