Days of Our Lives Spoilers: Chloe Furious With Brady – Learns Of Plot To Destroy Stefan

BY hellodrdavis on April 8, 2019 | Comments: one comment
Related : Days of Our Lives, Soap Opera, Spoiler, Television 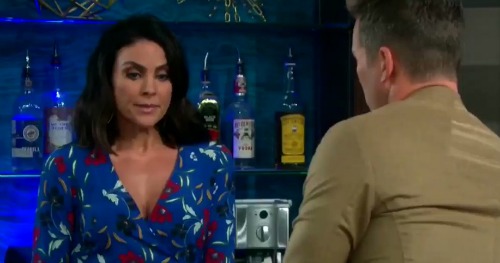 Days of Our Lives (DOOL) spoilers tease that Chloe Lane (Nadia Bjorlin) will soon be in for a big surprise. Chloe has been living at the DiMera mansion with Stefan DiMera (Brandon Barash) ever since El Fideo’s (Andoni Gracia) men set out to hunt her down and kill her. And Brady Black (Eric Martsolf) has been pretty vocal about his displeasure with Chloe’s living situation. He hates Stefan and doesn’t want to see Chloe and Stefan end up together romantically.

This has caused all sorts of problems for Chloe, who was subjected to various kiss attempts – and actual kisses – from both Stefan and Brady. But finally it seemed that Brady wised up and decided to back off. Chloe and Brady seemed to reach an understanding, as Brady indicated that he “got” why Chloe needed to live at the DiMera mansion for now.

But DOOL viewers know that Brady hasn’t backed down at all from plotting to get Stefan away from Chloe. In fact, behind the scenes Brady has enlisted Gabi Hernandez (Camila Banus) to come between Stefan and Chloe, by working to seduce Stefan. It’s a devious plot, but Brady is convinced it’s what he has to do to get Stefan to lose interest in Chloe.

Of course, Brady is also determined to best Stefan in business as well, and he’s got Gabi assisting him with that, too. Brady and Gabi seriously hurt DiMera Enterprises when they got Leo Starke (Greg Rikaart) to feed false intel to Stefan about a major business deal. Stefan was irked, and he strongly suspected that Gabi was in cahoots with Brady over the whole thing.

Well, it looks like Brady may not get as far with his plan to destroy Stefan as he thinks he will. DOOL spoilers indicate that Chloe will start to suspect that Brady is up to something. After all, he pretty suddenly made an about-face about Chloe living with Stefan, and that just might seem suspect to Chloe. Plus, Chloe has to notice that Gabi always seems to be around the DiMera mansion, meddling.

And if Gabi starts to come around the mansion more often and acting all seductive around Stefan, Chloe will surely start to suspect that something is going on. However she finds out about Brady’s deception, DOOL spoilers say that she’ll be furious about it. She’ll probably decide to confront Brady about it, but by this time, Gabi may have already gotten her claws into Stefan.

We’ll see what happens after Chloe finds out about Brady’s plot to destroy Stefan, but chances are Brady won’t back down in his fight. He seems very motivated to keep Chloe away from Stefan using any means necessary!

Do you think that Gabi will succeed in getting Stefan interested in her instead of Chloe? Stay tuned to DOOL and don’t forget to check CDL often for the latest Days of Our Lives spoilers, updates, and news.