BY hellodrdavis on April 8, 2019 | Comments: one comment
Related : Days of Our Lives, Soap Opera, Spoiler, Television 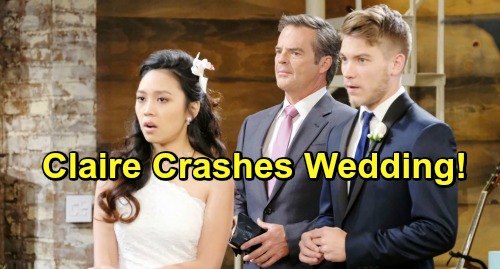 Days of Our Lives (DOOL) spoilers tease that Tripp Dalton (Lucas Adams) and Haley Chen (Thia Megia) are in for quite a surprise. They have been busy preparing for their upcoming wedding, which seems to be Haley’s only shot at this point of staying in the country. They managed to get through their challenging ICE interview and seem to be on the path to a successful wedding.

There’s only one problem…Claire Brady (Olivia Rose Keegan). Claire is pretending to be supportive of Tripp and Haley’s union, but she’s anything but. In fact, she’s been scheming behind Tripp’s back with Eve Donovan (Kassie DePaiva) to get Haley deported asap.

Eve and Claire enacted a huge plan to publicly expose Haley and Tripp’s marriage as sham so that Haley would be busted and sent away.

DO YOU THINK MELINDA IS HALEY’S MOM – MANY PEOPLE DO!

But their plan hit a snag. Eve got Claire to make a secret recording of Tripp admitting that his marriage to Haley was a fraud. The plan was for Eve to play the recording at Jack Deveraux’s (Matthew Ashford) campaign rally, but the recording got erased. So, Haley and Tripp weren’t “outed” as planned, and the wedding is still on.

Of course, Claire nearly hit the roof when her plan with Eve got derailed, and according to DOOL spoilers, Claire will soon take matters into her own hands and set out to destroy Haley and Tripp’s marriage plans any way that she can. The only problem is that she’ll need to continue to project the image that she’s a supportive girlfriend to Tripp, so she doesn’t alienate him.

Unfortunately for Claire, it looks like all of her efforts to derail the marriage will fall flat, and the marriage will be fast approaching. Days of Our Lives spoilers say that Claire will feel that she has no choice but to crash the wedding and show the world herself that Tripp and Haley are only getting married so that Haley can stay in the country.

It will be a desperate move, but Claire will be determined to get rid of her competition!

According to DOOL spoilers, Claire will bust into the wedding with evidence in hand that the marriage is fraudulent. She’ll have made a second secret recording of Tripp admitting that the marriage is a sham, and she’ll be intent on playing it for everyone to hear. It looks like it will be a bad scene that will put an immediate stop to Haley and Tripp’s marriage.

Of course, Claire might also be completely ruining any chance she has of staying in her relationship with Tripp going forward, but it looks like she won’t care at this point. She’ll apparently be fixated on keeping Haley and Tripp apart, and it looks like she’ll get her wish.

Given that this is Claire that we’re talking about, are her actions with respect to Tripp and Haley’s wedding really that surprising? Stay tuned to DOOL and don’t forget to check CDL often for the latest Days of Our Lives spoilers, updates, and news.