Days of Our Lives Spoilers: Maggie Sabotages Ericole with a Revelation About Brady – Fuels Nicole’s Hatred of Eric

BY Heather Hughes on May 7, 2019 | Comments: one comment
Related : Days of Our Lives, Soap Opera, Spoiler, Television 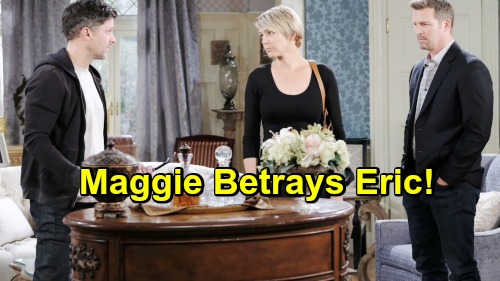 Days of Our Lives (DOOL) spoilers tease that Nicole Walker (Arianne Zucker) will face the most painful experience of her life. It’ll be assumed that Holly Jonas (Harlow and Scarlett Mallory) is riding in a van that slides off the road and over a cliff. Just as Rafe Hernandez (Galen Gering) and Ted Laurent (Gilles Marini) make it down to check for survivors, the vehicle will explode right in front of them.

Naturally, Nicole will hysterical at this point. She’ll sob as Eric Brady (Greg Vaughan) unsuccessfully tries to provide some comfort. Eric won’t want Nicole to feel like she’s alone in this, so he’ll take her home and attempt to soothe her. Unfortunately, Nicole will be inconsolable. She’ll be too grief-stricken to think rationally, so she’ll channel all that sorrow into rage that’s directed at Eric.

Days of Our Lives spoilers say Nicole will blast Eric over the drug cartel situation. She’ll believe they were behind the kidnapping, so she’ll argue that Eric shouldn’t have let Chloe Lane (Nadia Bjorlin) take Holly. Nicole will think Eric should’ve done whatever it took to get her daughter out of that house.

Part of Nicole may know this isn’t Eric’s fault, but another part of her will need someone to blame. Eric will be an easy target, so she’ll really let him have it. After Nicole storms out, she’ll find Maggie Kiriakis (Suzanne Rogers) and break down all over again. Days of Our Lives spoilers say they’ll mourn together, which might help Nicole in some small way.

However, Maggie will manage to create another “Ericole” hurdle. She’ll admit that Brady Black (Eric Martsolf) was deeply concerned about Holly living at the DiMera mansion. Of course, DOOL fans know that was less about Holly and more about getting Chloe away from Stefan DiMera (Brandon Barash). Brady was mainly trying to win Chloe back and eliminate the competition.

Since Nicole won’t know any of that, she’ll view Brady as the one who was truly looking out for her little girl. Days of Our Lives spoilers say Nicole will express her gratitude during their teary conversation. Brady will be overjoyed that Nicole’s alive and heartbroken to learn Holly didn’t make it. There’ll be a flood of emotions going on as they reconnect.

Eric will be devastated when Nicole shuts him out and leans on Brady instead. Days spoilers hint that Nicole and Brady’s romance will heat back up soon, so Eric may be the odd man out for a while. Thankfully, Holly won’t really be dead. She’ll make a comeback down the road, so Nicole will get good news eventually.

Holly’s survival should give “Ericole” another chance at happiness, but it’ll take some time to get there! We’ll give you updates as other Days details emerge. Stay tuned to DOOL and don’t forget to check CDL often for the latest Days of Our Lives spoilers, updates and news.