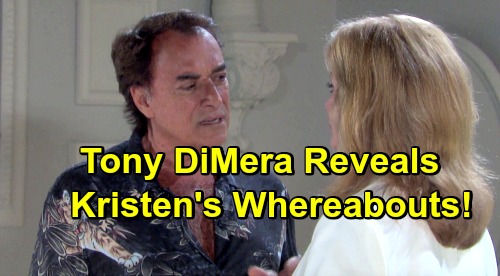 Days of Our Lives (DOOL) spoilers tease that we’ll soon be seeing a familiar face, when Thaao Penghlis returns to canvas on Monday, March 18. Thaao most recently portrayed Andre DiMera, who was killed in self-defense by Abigail DiMera (then portrayed by Marci Miller). But this time around, Thaao will be portraying Andre’s deceased brother, Tony DiMera.

The last time we saw Tony was back in 2009, when he died at University Hospital after an accident on the pier. This time around, Tony will appear when Marlena Evans (Deidre Hall) has an out-of-body experience after she’s poisoned by Diana Cooper (Judith Chapman). Diana will try to get rid of Marlena by poisoning her with Penicillin.

That will leave Marlena in a coma, and while she’s unconscious she’ll envision herself as she’s in transition to the “other side.” And that’s when she’ll encounter her old friend Tony. The two will talk, and Tony will tell Marlena that it’s too late and she can’t go back to earth to be with the love of her life, John Black (Drake Hogestyn).

Of course, we know that Marlena isn’t going anywhere, and that she’ll eventually come back to life. But while she’s visiting with Tony, it seems that she’ll have an interesting request. Days spoilers indicate that while Marlena is having her out-of-body experience, she’ll try to find out if Kristen DiMera (Stacy Haiduk) is really dead.

Kristen has tried to kill Marlena on more than one occasion, and there’s currently doubt as to whether she survived the warehouse fire in Memphis. It looks like Marlena will use her opportunity while she’s in “transition” with Tony to ask some pointed questions and find out if Kristen is still a threat to her when she returns to her life on earth.

It should be fun to watch Tony and Marlena catch up, and perhaps Marlena will get some good advice from her old friend. Days spoilers also state that Marlena will encounter some other familiar faces as she’s having her out-of-body experience. Who else do you think she’ll see? Stay tuned to DOOL and don’t forget to check CDL often for the latest Days of Our Lives spoilers, updates, and news.