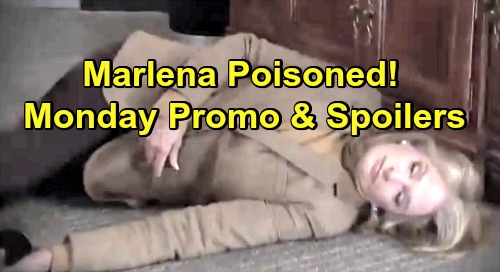 Days of Our Lives (DOOL) spoilers for Monday, March 11, tease that Diana Cooper (Judith Chapman) will take the medical details she’s learned and put her plot in motion. Diana did a little digging and found out Dr. Marlena Evans (Deidre Hall) is severely allergic to penicillin. She intends to use that to her advantage and get Marlena out of the picture permanently.

Diana will whip up a batch of penicillin cookies on Monday and place them lovingly in Marlena’s office. She’ll also leave a note, but she’ll sign it from Haley Chen (Thia Megia). Diana will make it seem like Haley was grateful for all Marlena’s help and just wanted to pass along some baked goods as a “thank you.” Unfortunately, Days spoilers say Marlena will sample the goodies and keel over soon.

Meanwhile, John Black (Drake Hogestyn) will have a heart-to-heart with Leo Starke (Greg Rikaart). After Leo catches John breaking in the safe and scoring incriminating evidence, he’ll worry about what’s next. However, John will sit down with Leo and appeal to his softer side. He’ll make him see that dropping the charges against Sonny Kiriakis (Freddie Smith) and Will Horton (Chandler Massey) is for the best.

It looks like John may mention Diana’s paternity claims as part of his speech. Days spoilers say Leo will eventually accept John’s advice, so a lucky break is headed Will and Sonny’s way. Over with Jack Deveraux (Matthew Ashford), he’ll get updates from Eve Donovan (Kassie DePaiva) and manipulate Tripp Dalton (Lucas Adams). It won’t be long until the cops are showing up to arrest Haley at the loft.

Days of Our Lives spoilers state that Claire Brady (Olivia Rose Keegan) will pretend she’s just as shocked as Tripp is. She’ll insist she had nothing to do with Haley’s jam, but his suspicions will rev up later this week. Covering her tracks may not be as easy as Claire thought.

DOOL fans know Claire’s juggling some major secrets. She’s also got a far bigger one, which involves trying to kill Ciara Brady (Victoria Konefal). That’s the secret Claire really has to keep under wraps! It could mean a serious prison sentence if that bombshell gets out.