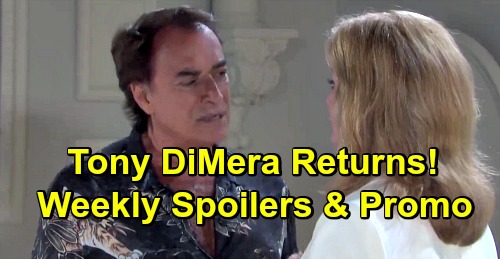 Days of Our Lives (DOOL) spoilers for the week of March 11-15 tease that some surprises are in store – including some fake ones! For starters, Claire Brady (Olivia Rose Keegan) will feign shock over Haley Chen’s (Thia Megia) arrest. She’ll act like she has no idea how the cops found Haley at the loft.

Of course, it’ll actually be Claire’s fault. Her betrayal and link to Eve Donovan (Kassie DePaiva) will leave Haley in a real bind. It won’t be long until Tripp Dalton’s (Lucas Adams) asking questions, so Claire will have to think fast.

Meanwhile, Chloe Lane (Nadia Bjorlin) will have another deep conversation with Stefan DiMera (Tyler Christopher). They’ll connect as they discuss their upbringings and find some similarities. However, Chloe will also bond with Rex Brady (Kyle Lowder) this week. He’ll lean on her for support and grow closer to her in the process.

Over with Dr. Marlena Evans (Deidre Hall), she’ll face a startling threat to her life. Days spoilers say Diana Cooper (Judith Chapman) will poison Marlena, so John Black (Drake Hogestyn) will be a mess when he discovers his love. Marlena will fight to survive in the hospital, where a nurse will claim Kristen DiMera (Stacy Haiduk) is responsible.

While Marlena hovers near death she will have a ghostly visit from Tony DiMera (Thaao Penghlis) in a welcome Days of Our Lives return. Tony will inform Diana’s poisoning victim that her soul has already crossed over and she must die!

Leo Starke (Greg Rikaart) will be told John is his father, so he’ll warn him about tricky Diana can be. He won’t want to count Diana out when it comes to his suspect list! Days of Our Lives spoilers say Leo will also tell Brady Black (Eric Martsolf) they’re brothers. You can bet Brady won’t be happy about that – if he even believes it.

Brady will reach out to Rex this week as well. He’ll insist that Rex might want to watch his back when it comes to Eric Brady (Greg Vaughan). Brady will note that Eric has a tendency to steal his brothers’ love interests. Later, Sarah will console Eric over Marlena’s hospital stint. She’ll pull him into a steamy kiss during their close moment, which Brady will spot.

Days of Our Lives spoilers say Brady will blow his top over the lip lock. He’ll rip into Eric, so Sarah should feel guilty about causing another setback in their relationship. Elsewhere, Julie Williams (Susan Seaforth Hayes) will advise Ciara Brady (Victoria Konefal). They’ll share a chat about relationships and how complicated they can be.

Across town, Ben Weston (Robert Scott Wilson) will get some guidance from Stefan, who won’t think Ben should give up on love. He’ll encourage Ben to have hope for the future, but DOOL fans know Ben is smitten with Ciara. It’s doubtful Ben will even consider anyone else right now.

It looks like another great week’s ahead in Salem. We’ll give you updates as other Days news comes in. Stay tuned to DOOL and don’t forget to check CDL often for the latest Days of Our Lives spoilers, updates and news.