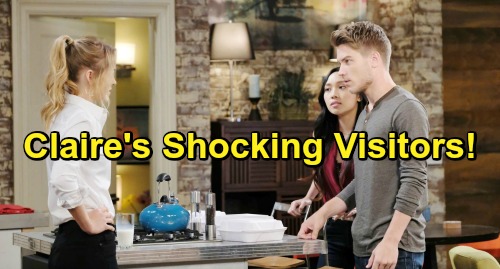 Days of Our Lives (DOOL) spoilers tease that Shawn Brady (Brandon Beemer) and Belle Brady (Martha Madison) are headed back to Salem. That’s great news since their daughter has apparently gone berserk without them. Maybe it wasn’t such a bright idea to leave Claire Brady (Olivia Rose Keegan) on her own in Salem. She’s got plenty of family around, but she’s not relying on them.

Instead, Claire gets inside her own head and convinces herself that twisted schemes are the answer. She can’t resist a plan that might work to her advantage. Of course, there’s a fine line between petty plotting and trying to kill your own aunt. Claire has done both, so Belle and Shawn need to hurry up! They’ve got some parenting to do when they return to DOOL this spring.

Claire was revealed to Days fans as the cabin fire-starter, so the secret will come back to bite her. That probably won’t happen until down the road though. It looks like Claire will exit sometime in August, so the show may save the shocker until closer to her onscreen departure. The fact that Claire nearly murdered Ciara Brady (Victoria Konefal) is a huge deal, so they’ll want to make the most of it.

However, Claire will face serious suspicions until then. After Haley Chen (Thia Megia) is arrested, Tripp Dalton (Lucas Adams) will think Claire might’ve had something to do with it. That’ll spark curiosity in Claire’s secrets overall, so Tripp could put some fire pieces together. He already found the lighter, which should be an important hint for him later.

We also mentioned Belle and Shawn, who’ll most likely be in town for Caroline Brady’s (Peggy McCay) upcoming memorial service. Days of Our Lives spoilers say they show will honor McCay’s passing through her character’s funeral, so there’ll be loads of returns for that. Still, Shawn and Belle will make time to catch up with their baby girl. Claire could clearly use the support of her parents.

Will Belle and Shawn sense that something’s going on with Claire? Will Claire slip up and cause trouble for herself? There’s a chance her secret could come out ahead of her exit if Days can stretch out the aftermath. Whatever the case, Claire’s in for a rough few months!