BY hellodrdavis on March 10, 2019 | Comments: one comment
Related : Days of Our Lives, Soap Opera, Spoiler, Television 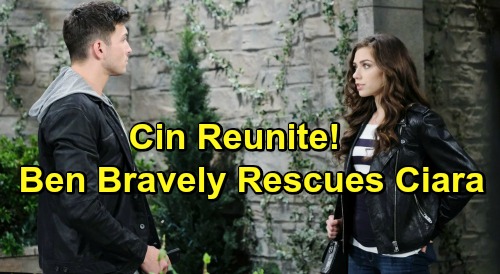 Days of Our Lives (DOOL) spoilers tease that Ben Weston (Robert Scott Wilson) will once again save the day for his love Ciara Brady (Victoria Konefal). Ben is trying his best to move on with life after breaking up with Ciara. Ben ended the relationship because he’s afraid that he still has a dangerous side and will someday hurt Ciara.

And Ben’s doing his best to make sure that Ciara wants nothing to do with him. He accepted Stefan DiMera’s (Tyler Christopher) offer to go back to work as head of security at the DiMera mansion – something he knew Ciara wouldn’t approve of. In the days ahead, he’ll distance himself from Ciara and just focus on his work.

But it seems that Ciara won’t be keen on the breakup, and she won’t just exit Ben’s life quietly. Ciara truly loves Ben, and she’s not going to give up on him, despite the fact that he’s working for Stefan. It looks like Ciara will keep after Ben and try to persuade him to give their relationship another try.

Ciara will even show up at the DiMera mansion to try to talk some sense into Ben. And while she’s there, a seriously dangerous situation will erupt. Perhaps this will have something to do with the situation that Chloe Lane (Nadia Bjorlin) is currently in. Chloe’s in danger due to El Fideo’s (Andoni Graci) goons, and she may additionally have a stalker following her.

According to Days of Our Lives spoilers, gunfire will break out at the DiMera mansion, and this will put several lives in danger. If someone’s after Chloe, then she and her kids may be the actual targets, but Ciara could get caught in the crossfire. Perhaps Ciara will be at the mansion to beg Ben to get back together, or to remind him of what the two of them have, when she’ll be held at gunpoint.

But we needn’t worry about Ciara, as Days spoilers say that Ben will rescue her. This will likely be another pivotal moment for Cin, as Ben realizes that he nearly lost Ciara. He may start thinking about how bleak life would be without Ciara in it, and it could be the event that brings Cin back together for good.

Do you think that we’ll see a Cin reunion after Ben rescues Ciara? Stay tuned to DOOL and don’t forget to check CDL often for the latest Days of Our Lives spoilers, updates, and news.