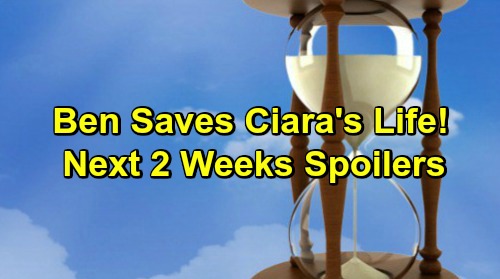 Days of Our Lives (DOOL) spoilers for the next two weeks tease that some scary moments are in store. During the week of March 11-15, Dr. Marlena Evans (Deidre Hall) will be in a fight for her life. She’ll sample some of the penicillin-laced cookies Diana Cooper (Judith Chapman) puts in her office and suffer a severe allergic reaction.

Of course, that’s exactly what Diana had in mind. She’s been determined to carry out the perfect deadly plot, but it turns out it won’t be so perfect. After John Black (Drake Hogestyn) discovers Marlena’s unconscious body and calls for help, Diana will get in touch with him. She’ll be hoping to hear about funeral arrangements, but she’ll learn Marlena’s in a coma instead.

Diana will just hope Marlena won’t be able to pull through this time. However, she’s underestimating the power of John and Marlena’s love! Days of Our Lives spoilers say Marlena will definitely try to survive, but she’ll hit some obstacles along the way. She’ll run into some familiar DOOL characters as she lingers between life and death.

One of those characters will be Tony DiMera (Thaao Penghlis), who’s deceased and will advise Marlena. Tony will insist that Marlena’s soul has left it’s body, so there’s no going back. Naturally, Marlena won’t just accept that. She’ll cling to the hope of a future with John and fight to be with him.

During the week of March 18-22, Diana will grow concerned. She’ll realize she might’ve left proof at the scene of the crime – and it could point straight to her. Meanwhile, JJ Deveraux (Casey Moss) will hope to make things right with Haley Chen (Thia Megia). He’ll offer to marry Haley in an effort to keep her in the country.

Haley may be tempted, especially since they were living together up until a few days ago. They could probably sell the idea that they’ve been in love for a while. However, Haley just doesn’t trust JJ anymore. Besides, it’d bring more drama if she married Tripp Dalton (Lucas Adams) instead. Will he propose as well?

Days of Our Lives spoilers say Tripp will battle suspicions following Haley’s arrest. He may end up blaming Claire Brady (Olivia Rose Keegan) for turning her in. If so, Tripp will have it exactly right. That could be enough to prompt a breakup. Whatever the case, DOOL fans can expect Trip to hit Claire with a shocker. Perhaps he’ll reveal that he intends to make Haley his wife!

Over with Leo Starke (Greg Rikaart), he’ll get duped by Brady Black (Eric Martsolf). After Brady pulls a dirty trick, Leo will be absolutely furious. Days of Our Lives spoilers state that Ben Weston (Robert Scott Wilson) will also have an eventful week. Ciara Brady (Victoria Konefal) will be at the DiMera mansion with Ben when gunshots ring out.

Ben will leap into action and save Ciara’s life once again, so she’ll hope this makes him see they’re meant to be together. Ciara will insist that Ben consistently comes to her rescue. He’s never hurt Ciara, but will he finally trust that he’s not going to?

The next two weeks will bring plenty of excitement. We’ll give you updates as other Days news comes in. Stay tuned to DOOL and don’t forget to check CDL often for the latest Days of Our Lives spoilers, updates and news.