Days of Our Lives Spoilers: Eric Agrees To Share Custody With Sarah On One Condition – No More Xander In Mickey’s Life

BY hellodrdavis on November 25, 2019 | Comments: one comment
Related : Days of Our Lives, Soap Opera, Spoiler, Television 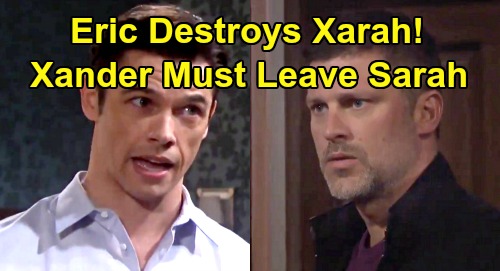 Days of Our Lives (DOOL) spoilers tease that Eric Brady (Greg Vaughan) is going to be absolutely floored when he hears what Nicole Walker (Arianne Zucker) has to say. As DOOL viewers know, Eric has just proposed to Nicole, and he’s expecting an enthusiastic “yes” from her, but he’s about to get a shock. Nicole is feeling terribly guilty, as she has for some time, about the fact that Eric is the father of Sarah Horton’s (Linsey Godfrey) baby, Mickey.

Of course, Eric has no idea that he’s Mickey’s father. He’s been under the belief that Xander Kiriakis (Paul Telfer) is the dad, so when Nicole breaks down after the proposal and admits that Eric’s the father, he probably won’t see it coming. Nicole will be feeling terrible about the whole thing since Mickey is currently missing after being kidnapped.

Well, the good news here is that Mickey will soon be returned from her kidnapping ordeal safe and sound. As it currently stands, Ciara Brady (Victoria Konefal) has found Mickey in the care of some thug and she seems to be on the verge of rescuing her. That will be a huge relief for Sarah and Xander, but it looks like as soon as they get Mickey back, they’ll have Eric to contend with, and he’ll be peeved.

He’s going to want some answers about why Sarah kept his daughter from him for all this time, and he’s going to be absolutely furious with Xander for stepping in and pretending to be Mickey’s father. Eric can’t stand Xander as it is, and this whole situation isn’t going to help matters any.

In fact, Days of Our Lives spoilers say Eric will soon insist that Xander get as far away from Mickey as possible. This is going to be a problem, since Xander has bonded with Mickey and clearly loves the little girl. He’s probably not going to be willing to stay away from Mickey at this point, and Sarah will likely agree with Xander. After all, she and Xander have grown pretty close since Mickey came into their lives.

But it looks like Eric won’t be playing, and he’ll start talking about custody issues. DOOL spoilers say that Eric will ultimately agree to sharing custody of Mickey with Sarah, but he’ll have one big condition. And given the way that he feels about Xander, that condition will likely be that Xander stays away from Mickey completely. This will be a huge condition, given that Sarah, Mickey, and Xander all currently live together at the Kiriakis mansion.

So, what will Eric want here? For Sarah and Mickey to move out, or perhaps for Xander to move out? Either way, this will be a huge deal, and Sarah will have a big choice on her hands. Of course, if Eric is willing to agree to share custody as long as his condition is met then that probably means that the alternative is him fighting for sole custody, which would be a disaster for everyone.

It will be interesting to see what happens here and who ends up winning this battle. Xander may not have much of a choice in the matter, because if he sticks near to Sarah and Mickey, then that could mean a nasty custody war for Sarah, which would be a mess.

Do you think we’ll see a custody war, or will Xander do what Eric wants and stay away from Mickey? Stay tuned to DOOL and don’t forget to check CDL often for the latest Days of Our Lives spoilers, updates, and news.